This image actually speaks for itself,  although one of the nuances in it may be lost on most folks.  Mr. Trump did not notice this altered image of the presidential seal behind him.  The person who put this there,  got fired for doing it.  I got this off the PBS NewsHour website,  not “social media”.  It is credible. 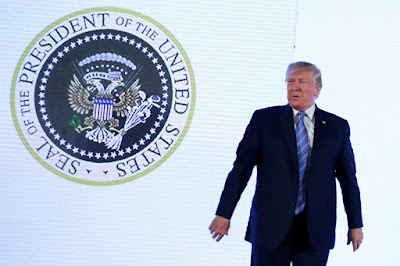 Everybody notices the golf clubs,  and the connection to what Mr. Trump loves to do at Mar El Lago.  In the real presidential seal,  these are arrows,  contrasting with the olive branches in the other talon.

Update 8-3-19:  it has come to my attention that there is a second level of the swipe against Trump about the Russian connection.  This is very hard to see,  especially in my copied photo,  even if you enlarge it.  But,  the motto in the banner has been altered from "E Pluribus Unum" to "45 Es Un Titere",  which translates to "45 is a puppet".

The revised motto is Spanish,  not Latin,  which connects to the border crisis manufactured by bad policies and neglect.  And,  in yet another level of swipe,  the olive branch in the other talon has been replaced by a wad of cash,  although this,  too,  is difficult to see in my copy of the photo.

The news stories indicate that the artist who drew this is a former more-or-less independent voter who has become very disenchanted with Trump.  He drew it for emotional catharsis,  and did not intend it to be used this way.

Somebody else searching for a presidential seal to project during a Republican event found this on the internet,  more probably by mistake than malicious intent,  and got fired for using it.

The evils of political extremism show in this incident in two ways:  (1) the artist has gotten hate mail for creating this,  and (2) for the most part,  the individual who used this at the event has been automatically presumed to an intentional political saboteur.

Why would I post this?  Well,  let’s just say I have good reasons not to be a Trump supporter,  which makes this image even funnier than otherwise.  Read on to understand why,  being warned this part is not funny at all.

Mr. Trump is wrong in his claims very nearly 100% of the times that he has been fact-checked.  That track record suggests you should believe nothing he says. How is having such an egregious chronic liar in the White House a good thing for America?

Mr. Trump has sort-of-maintained the economic recovery that began under Mr. Obama,  in spite of all the damage he has been doing with his trade wars and tariffs.  You don’t have to start a trade war to renegotiate a trade agreement.  This cannot last:  the economy will crash,  and it will happen on his watch,  directly attributable to what he has done with those trade war things.  How are such idiotic policies good for America?

Mr. Trump has instituted immigration policies that by his own admission,  and the admission of others in his administration,  intend to dissuade other potential immigrants from ever coming,  by grossly mistreating those already at our border.  This continues,  in defiance of a court order to cease and desist.  How is that not a form of both racism and state-committed terrorism?  How is such a policy of racism and terrorism good for America?

Former president Andrew Johnson was impeached for racism in 1865,  although he was not convicted in the senate.  Racism is therefore an impeachable offense.

We have fought against state-committed terrorism since World War 2 (the Gestapo and the SS as examples).  This evil on our border continues today under the Trump administration because not yet enough good people are standing up against it.  If we fought wars against state-committed terrorism,  then how is its commission by our own government not an impeachable offense?

Lies About the Mueller Report

There are still a lot of lies being told about the Mueller report,  most (but not all) coming from the GOP.  Unfortunately for the country,  they seem to have prioritized political advantage and getting re-elected over the good of the country.  If you read the report for yourself,  you can see through the lies,  and see what it really says,  despite the redactions in the publicly-released form.  I did.

The political lies about Mueller’s report continue,  hoping no one will read for themselves the truth of the matter.  This is party politics at its worst. I recommend you hold them accountable by not re-electing them,  next time.

It does clear Trump and his campaign of conspiring with the Russians (ahead of time) for them to commit this interference crime to benefit him. THAT is the only “exoneration” anywhere in Mueller’s report.

Volume 2 documents some 10 instances of obstruction-of-justice on the part of Trump and his minions,  any one of which is likely an impeachable crime.  Mueller chose not to indict,  or to definitively-conclude that crimes were committed,  based on a Department of Justice memo claiming that sitting presidents cannot be indicted.

But he documented the crimes,  and he intended Congress to follow up on them. Which they are,  at least in the Democrat-controlled house.  He specifically said that while he did not officially accuse Mr. Trump of obstruction of justice,  he did NOT exonerate Mr. Trump of it,  either.

Siding With Putin Instead Of His Own Intelligence Agencies or Allies

The intelligence agencies and the Mueller report document that the Russians interfered in the 2016 election,  and just how they did this crime.  Mr. Trump has repeatedly in public taken as truth Mr. Putin’s denial of this.

In addition,  Mr. Trump cozies-up to Putin,  Kim Jong Un,  and China’s leader,  while insulting our allies or chastising them over money spent on NATO.  The Russians,  under two different governments (Soviet and Putin) have tried without success for about 7 decades to weaken NATO.  Now our NATO allies have doubts we will come to their aid if needed,  and it is Mr. Trump who did this weakening of the alliance.

How is Russia under Putin not a hostile power?  How is either problem not “aid and comfort to the enemy”?  Read the definition of treason in the Constitution for yourself.  How are these two things not at least bordering upon treason of the aid and comfort type?  How is not holding Mr. Trump accountable good in any way for America?

What Shall We Do?

It’s getting close to the 2020 election now.  It may be too close for a real impeachment proceeding,  especially since the GOP-controlled senate still appears entirely unwilling to convict.  THAT dereliction-of-duty on the part of the GOP senators is another topic,  my point here is that Mr. Trump does NOT need to be president anymore.  Whatever good he might possibly do (or have already done) is far outweighed by the evils I have listed.

To that end,  the short form sound bite is:

The longer-form rationale is:

“Doesn’t matter who the Democrats run,  how could you possibly be worse off?”

If the house chooses to impeach between now and the election,  it should be aware that a non-conviction in the senate will motivate Trump supporters to turn out and vote.  This is not because of facts,  but because of their belief system (that Trump is good for America despite his faults).  True believers rarely respond to facts. Only something truly egregious could overwhelm that belief.

A better strategy might be to use the extra power of “impeachment-related proceedings” to uncover the tax records of Mr. Trump.

These will probably reveal that the bulk of his investor capital since the casino bankruptcy is coming from the same Russian banks that symbiotically keep Mr. Putin in power in Russia.  If Putin really wants something of Trump,  the banks will demand it of him.   He is “in hoc” to them.

I do not know this to be a fact,  but it seems very likely to me,  because of how desperate he seems NOT to have those records made public.  It’s a “guilty dog barks loudest” sort of thing.  Not proof,  but good cause to investigate.

THAT is the type of egregious-connection-to-Russia that might open some Trump supporter eyes,  as to who and what he really is (a clear-and-present danger to our democracy).  A revelation like that would likely cost him the election,  if not a senate conviction.