According to Wikipedia,  Spacex’s “Raptor” as it will power the “Starship” upper stage spacecraft is a staged combustion cycle such that gas bled to power the pumps is reintroduced (no overboard dump).

The max chamber pressure as intended for the design is reported by Wikipedia to be just about 4400 psia.  It reportedly has an area ratio of 40,  although a vacuum-only design might be nearer 100.  The reported design value for sea level thrust (at the area ratio of 40) is 440,000 lb.

Wikipedia lists performance as 330 sec Isp at sea level and 380 sec in vacuum.  I am doubtful of that last figure,  unless the longer vacuum expansion bell is used.

Wikipedia lists its “diameter” as 1.3 meters (about 51 inches);  I presume this is exit area at the 40:1 ratio.  I also presume it will have just about 5:1 pressure turndown ratio.

I ran my “liquidrockets.xlsx” spreadsheet tool to reverse-engineer the performance of this engine,  using the new “allin1des” worksheet that does nozzle CF and engine sizing ballistics,  plus altitude performance estimates,  all in one place.

Sizing the nozzle proportions was slightly iterative,  in that I had to iteratively determine the perfect-expansion design backpressure such the expansion ratio matched the 40:1 figure reported in Wikipedia.  The worksheet output image for this group is given in Figure 1. 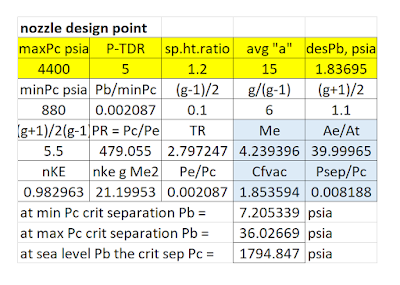 Doing the ballistics to size the engine was also iterative.  I used a chamber/throat area contraction ratio of 5,  and a chamber L* = 90 inches for this.  I also presumed the nozzle throat discharge efficiency was 0.995.  It was values of the vacuum thrust level that I had to input iteratively,  until I achieved the 440,000 lb sea level thrust that Wikipedia reports.  This group’s image is given in Figure 2. 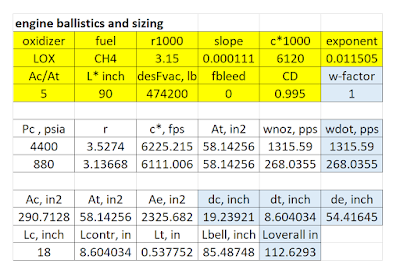 This gave me the data necessary to estimate performance vs altitude (from sea level to vacuum) for both max chamber pressure = 4400 psia (per Wikipedia) and min chamber pressure = 880 psia,  calculated from the max value and my presumed 5:1 pressure turndown ratio.  This groups image is given in Figure 3.  Note the 54.4-inch exit diameter in my model,  which is not far at all from the 51 inch value quoted by Wikipedia. 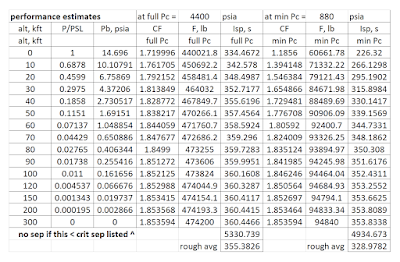 The critical backpressure values for onset of nozzle flow separation in the expansion bell are given in Figure 1.  They show that there is no danger of flow separation when operating at max chamber pressure,  from sea level to vacuum.  When operating at min chamber pressure,  the nozzle will be separated somewhere just below 20 kft,  at local ambient atmospheric pressure 7.2 psia.  The min allowable chamber pressure at sea level that does not flow separate is estimated at 1795 psia,  which corresponds to a min allowable turndown ratio on the launch pad of 2.45,  instead of the max turndown ratio of 5 presumed otherwise.

Plots of thrust coefficient CF,  thrust F,  and specific impulse Isp,  all vs altitude,  are given in Figures 4,  5,  and 6,  respectively.  All these show the expected behaviors.  Thrust is reduced from its vacuum value by the exit area times ambient backpressure term.  That term zeroes as you climb into vacuum. 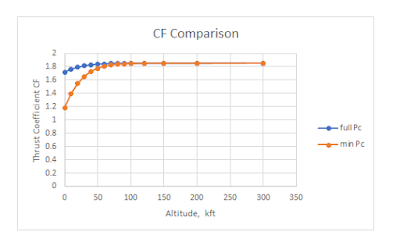 Figure 4 – CF vs Altitude at Max and Min Pc 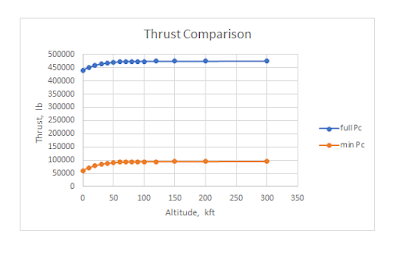 Figure 5 – F vs Altitude at Max and Min Pc 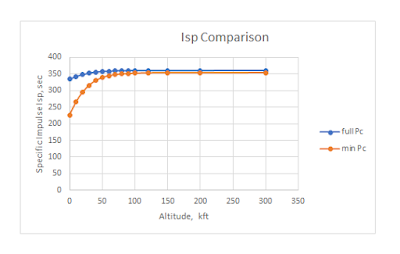 Figure 6 – Isp vs Altitude at Max and Min Pc


Note the full-pressure level of specific impulse at sea level:  calculated to be 334.4 sec vs Wikipedia’s 330 sec.  My spreadsheet-estimated performance is thus very close to the public claims for this engine.  The difference is out in vacuum:  my spreadsheet estimates full pressure vacuum performance as 360.4 sec,  not the 380 sec claimed in the Wikipedia article.  That higher value would have to correspond to the longer vacuum bell,  not the 40:1 bell that can be used at sea level,  with at least some turndown.

This spreadsheet can estimate performance at altitude,  but it does not calculate the dynamical flight performance of an ascending rocket vehicle.  It would take such a real trajectory program to find out what the effective average Isp might be,  for flight from sea level to vacuum.

That being said,  just arithmetically-averaging the values in the spreadsheet table (in Figure 3) will get one “into the ballpark” for realistic use in the rocket equation.  My spreadsheet shows a full-pressure average of nearly 355.4 sec.

Be aware that this model indicates you cannot successfully operate this engine below about 20 kft altitude at the min chamber pressure.  From there on up,  the full 5:1 pressure turndown (to only 880 psia) is available without risking flow separation.  But,  at lower chamber pressures,  the backpressure term is proportionally larger in effect,  and the chamber c* velocity is a little lower.  Down low in the atmosphere,  low-pressure Isp values are substantially lower than full-pressure Isp values (at 20 kft,  295.2 vs 348.5 sec).  The difference is small out in vacuum,  but still not zero:  353.8 sec vs 360.4 sec.

“Starship”,  as currently envisioned,  has 7 of these 40:1 “Raptor” engines,  totaling at sea level some 3,080,000 lb of thrust at liftoff at full power setting.  Projected values from Musk’s presentations seem to indicate an inert mass of 85 metric tons,  a payload near 100 metric tons,  and a max propellant load of 1100 metric tons.  That totals to some 1285 metric tons at liftoff.  If the payload is nearer 200 tons,  the liftoff mass is nearer 1385 tons.  For a figure-of merit,  call it a nominal 1300 metric tons.

I ran a quick rocket equation investigation (using another spreadsheet) of “Starship” using these reverse-engineered performance results.  I used the claimed 85 metric ton inert mass and 1100 metric ton propellant mass,  and a zero payload mass.  I used 7.9 km/s orbital velocity,  factored up 10% to account for best-guessed 5% losses each for gravity and drag.  I ignored the deorbit burn,  and presumed a low-altitude terminal velocity to be “killed” of 0.5 Mach,  factored-up by 1.5.

The results say that the “Starship” alone (no booster) can barely reach orbit,  with no payload.  That would be its single-stage-to-orbit (SSTO) potential.  The key here is whether the 85 ton inert weight can be achieved in a vehicle capable of surviving reentry,  and still be capable of a propulsive landing,  as claimed.  But if those numbers remain realistic after the initial suborbital flight tests,  then,  yes,  it has SSTO potential:  “Starship” alone can likely reach low Earth orbit unladen,  for flight test purposes.

That spreadsheet image is given in Figure 7. 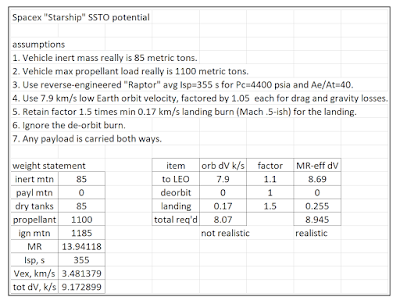 Update 6-28-19:  I did a quick re-analysis of the “Raptor” with a larger expansion bell such that the bell expansion exit area ratio was 200,  not 40,  and keeping the same throat diameter and total flowrate as the sea level design.  This gave me a vacuum thrust near 501,700 lb per engine,  at essentially the same throat area and total flow rate.

Vacuum specific impulse computes as 381 sec,  versus the 380 reported on the Wikipedia website.  That’s really rather close!  Close enough to trust my reverse-engineering analysis.  Sea level Isp of this kind of design is irrelevant.  If you do not understand why,  then you have no business at all using my numbers,  for any purpose whatsoever.

The exit diameter computes as 121.7 inches = 3.09 m when I do this.  This engine design sizing experiences expansion bell flow separation below about 20 kft at its max 4400 psia chamber pressure,  and below around 55 kft at its min chamber pressure of 880 psia (which assumes 5:1 pressure turndown).  It CANNOT be used at sea level under any circumstances whatsoever!

That 381 sec vacuum Isp compares very well with the 380 sec Isp listed on Wikipedia for the vacuum version of the Raptor engine.  Only the combination of very high chamber pressure and very large expansion ratio allows this to occur at all!  That high chamber pressure is something still to be demonstrated in engine ground tests,  as of this writing!  As of this writing,  this thing is not yet ready to fly at its claimed ratings!

At Ae/At = 200 and the same 19.2-inch throat diameter as the sea level design,  the exit diameter is near 121.7 inches,  which is 3.09 meters.  At full-thrust setting,  this vacuum engine pulls the same 1316 lbm/sec (per engine) from tank storage as the sea level engine.  My specific impulses are computed from the flow rates out of tank storage,  not just the nozzle flow rates.  These flow rates are NOT the same if any pump drive gas is dumped overboard!

This result confirms exactly what I said in the original article:  a sea level LOX-LCH4 engine generating 330-ish sec Isp at sea level WILL NOT generate 380 sec Isp in vacuum;  its vacuum Isp is closer to only 360 sec.  Period!  End of issue!  Also accordingly,  any such vacuum design that will generates ~380 sec Isp will NOT be usable anywhere near sea level!  There is NO WAY AROUND THAT!  Period!  End of issue!

An engine using those same propellants which generates 380 sec Isp in vacuum is one that ABSOLUTELY CANNOT be used at sea level!  Mixing those two numbers (as they are reported on Wikipedia for the same engine) is a SERIOUS MISTAKE!  Please bear that in mind!

Advertising hype is not truth,  as we all already know! 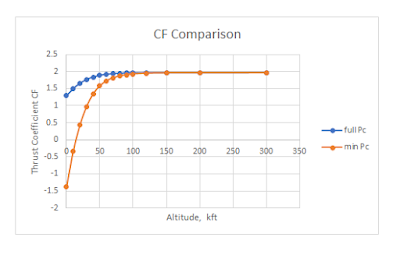 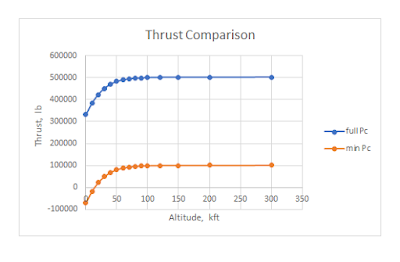 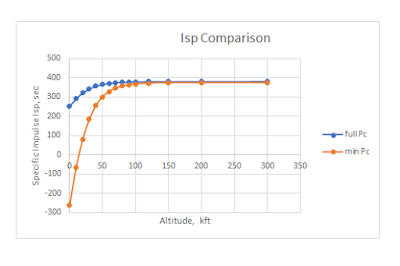 These are only estimates,  I got "close".  Not "perfect".  (That's an inside joke,  by the way!  These estimates are only "good" to 3 or 4 significant figures!) 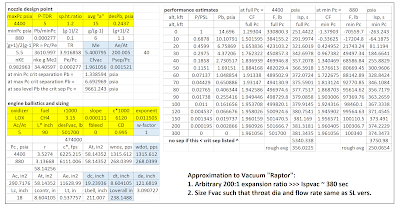