Update 7-2-2020:  I found a mistake in my performance-estimating spreadsheet.  I used the unfactored delta-vee requirements for figuring mass ratios,  instead of the factored delta-vee requirements.  I corrected this in the spreadsheet,  and used those revised images to correct the spreadsheet results depicted here as Figures 5,  7,  and 9.  Then I corrected the results shown in Figure 10 by re-editing that figure. Where numbers changed in the text of the article,  I edited them with line-out and red text.

The first examined the latest data available for the Starship/Superheavy designs,  and projected its performance into low Earth orbit (LEO),  complete with a look at what kind of tanker flights might be required to leave LEO.  That same set of weight statements and engine performances is assumed here.

The second examined trajectories to Mars,  including both Hohmann min-energy,  and faster trajectories,  and including direct entries,  and entries into low Mars orbit,  and to Phobos.  Of most interest here was the faster trajectory of an exactly 2-year period,  which provides a 2-year abort path if the direct landing on Mars cannot be made,  for any reason whatsoever.

This article also examines direct entry and landing upon Mars,  starting from LEO,  via either Hohmann or the faster 2-year abort trajectory.  Further,  it looks at stopping in low Mars orbit (LMO),  followed by deorbit and landing on Mars.  It does not examine going to Phobos,  which would be broadly similar to stopping in LMO,  except a bit worse,  energetically.

Returns are launched directly from the Martian surface,  assuming a full refill using propellants made locally on Mars.  Whether one stops in LMO or just escapes directly,  the total departure velocity requirement is the same,  for the same return trajectory.  Stopping in LMO relieves a tight launch window from the surface,  replacing it with a fairly tight window for trans-Earth injection from LMO,  which is actually an easier target to hit,  in actual practice.

A summary illustration (not to scale) of the two basic transfer trajectories,  with the LMO option,  is given in Figure 1.  All figures are at the end of this article.

I have been to the Spacex website many times over the last several years.  Among the other things posted there have been atmospheric entry simulations for their Starship vehicle.  There are two such:  one for entry at Earth,  and one for entry at Mars.  These are rarely posted at the same time,  and are quite different,  because the Martian atmosphere resembles the Earthly atmosphere above 105,000 feet (about 33 km).  See Figure 3.

The Earthly entry trajectory ends hypersonics at about Mach 3,  above 40 km,  followed by a bending downward while pitching upward to dead-broadside descent angle-of-attack.  This dead-broadside fall is termed the “belly-flop” or “skydiver” maneuver.  It is supersonic up in the thin air,  and very subsonic down in the thick air near the surface.  Spacex lists this as 68 meters/second under about 5 km.  There, they pitch to tail-first while igniting the engines to land.  That is a very modest delta-vee on the order of 0.070 km/s,  but it has to be factored-up significantly to cover hover and divert allowances.

The Mars entry ends hypersonics at about Mach 3 very close to the surface:  about 5 km altitude.  Spacex’s simulation shows a lifting pull-up to decrease speed while gaining altitude,  to around Mach 2-ish at 10 km/s.  Right after that is when they pitch to tail-first and fire-up the engines to brake for landing,  at something like 900 meters/sec = 0.9 km/s.  Again,  that needs a significant factoring-up to cover hover and divert needs.

It may well prove to be,  that Spacex will need to fire up the engines earlier at Mars entry,  in order to augment lift with thrust to achieve the pull-up maneuver.  If so,  the landing burn delta-vee is even higher,  but I did not assume that to be the case for this analysis!

The Hohmann min-energy trajectory is depicted in Figure 4.  This is an ellipse with its perihelion at Earth’s orbit about the sun,  and its aphelion at Mars’s orbit about the sun.  Half of it covers the voyage to Mars,  the other half covers the return voyage.  For purposes of this analysis,  I only looked at Earth and Mars at their average distances from the sun.  Those variations do affect the results,  Mars more than Earth because of its more eccentric orbit.  But,  the averages are close enough to find out “what ballpark you are playing in”,  which is the point here.

For the baseline outbound voyage,  entry at Mars is direct from the interplanetary trajectory.  There is only a course correction budget needed along the way.  The three burns are LEO departure,  course correction,  and direct landing upon Mars.  The value of the course correction budget (0.5 km/s) is nothing but a guess,  but it is a good ballpark guess,  being about 2-3% of the typical velocity with respect to (wrt) the sun during the voyage.  Note that in this baseline there is no possibility of aborting the direct landing for reasons of adverse conditions at Mars.

For the baseline return voyage,  entry at Earth is direct from the interplanetary trajectory.  The same 0.5 km/s course correction budget is presumed for this leg.  The three burns are Mars departure,  course correction,  and direct Earth landing.  There is no possibility of aborting the direct Earth landing.  The difference is Mars departure,  which could be broken-up into two burns:  one to achieve LMO,  the other to escape onto the return interplanetary trajectory.  The total is the same,  either way.

What I got for this mission is the spreadsheet image shown in Figure 5.  The weight statements,  engine selections for each burn,  and engine performances,  are all listed in the spreadsheet image.  It covers both the voyage to Mars,  and the return to Earth,  as separate sections,  with different weights (payload values) for each leg.  Payload both ways exceeds what the “2020 Reverse-Engineering Estimates” article found to be the maximum payload deliverable to LEO.  The payloads shown are the max values to the nearest metric ton,  that gave positive fractional-ton remaining propellant,  after all burns were fully expended (the spreadsheet really is iterative).

Therefore,  to meet these weight statements,  not only must the Starship’s propellant be refilled to 100% of capacity on LEO,  but also some extra payload mass must be brought up to LEO and loaded on board.  Those means are not explored here.  However,  284 220 metric tons of total payload (people plus cargo) is a generous allotment that this design can deliver to Mars,  if an 8.62 month one-way voyage is acceptable.

The Hohmann return payload of 153 144 metric tons is less,  because the net total delta-vee requirement to return is higher.  This mission spends about 13 months at Mars waiting for the orbits to be “right” to come home,  so you have 13 months to make 1200 tons of propellant!  The next opportunity is 26 months after that. The min round trip total is about 30.2 months.

The faster transfer trajectory that I chose to analyze is the 2-year abort return ellipse.  Its perihelion is at Earth’s orbit,  but its aphelion is far beyond Mars,  nearly to the main asteroid belt!  Its period is exactly two years,  so that if you follow it,  the Earth will be at its perihelion just as you arrive there.  In order to have Earth there when you are there,  the period of any such orbit must be an integer multiple of 1 year.  It is simply not a free-return abort orbit,  if the Earth is not there when you get there.  See Figure 6.

I used the same landing allowances and course correction allowances for the faster transfer case.  The LEO departure and Mars surface departure velocities are significantly higher,  because the energy of this orbit is also significantly higher.  That raises required mass ratio,  and lowers max payload.  Again,  the payloads I found were maximum to the nearest ton,  for a positive fractional-ton remaining propellant,  after all burns were fully expended.  What I found is the spreadsheet image in Figure 7.

Max payload to Mars still exceeds equals what can be delivered to LEO without any separate freight deliveries!  Max payload returnable to the Earth is actually quite limited at only 39 34 tons!  This mission has about 15-1/2 months on Mars in which to manufacture the return propellant.  It is 2 years long overall.

As for stopping in LMO instead of direct Mars entry,  I only looked at the outbound voyage to Mars.  I did look at both the Hohmann min-energy transfer,  and the faster transfer using the 2-year abort orbit.  This added more burns to be made.  Now,  there are LEO departure and course correction as before,  plus an entry into LMO,  plus a deorbit from LMO,  and the same landing burn as before.  The faster transfer has the higher LEO departure and LMO entry requirements.  The final landing burn and the deorbit and course correction burns,  are all the same.  This is shown in Figure 8.

What I found for this,  is the spreadsheet image given in Figure 9.  I was quite surprised to find that it is indeed possible for a Starship to enter LMO and still have the propellant remaining to land.  It can only do this from the Hohmann min-energy transfer,  and only with very drastically-reduced payload (only 39 34 metric tons).  This is just not a possible landing abort mode,  unless you deliberately use Starship to transfer very small payloads to Mars.  From the faster transfer trajectory,  we are 21.5 33.6 tons short of the min landing propellant needed to avoid a fatal crash,  even at zero (!!!) payload.  That is just not feasible.

I have summarized all these results in Figure 10.  Using the “2020 reverse-engineering” numbers,  payload transferable to Mars looks to be more,  or at least equal to,  than what can be transferred to LEO,  for both Hohmann min-energy transfer (284 220 metric tons for 8.62 months one-way),  and for fast transfer on the 2-year abort orbit (197 149 metric tons for 4.26 months one-way).  The earlier article indicated a max of 149 tons could reach circular LEO,  with full recovery of both stages.

None of these tankers has the payload capacity to deliver what would increase the payload of the vehicle going to Mars from the minimum 149 tons.  Such increases would have to come from separate “freighter” flights.  There has been no way identified yet,  for transferring cargo from one Starship to another while in LEO.   No one has even mentioned this.

It is possible to stop in LMO before landing if you sharply reduce your payload before you ever depart LEO,  if you are on a Hohmann min-energy trajectory (78 50 metric tons for 8.62 months one-way).  But it is impossible,  even at zero payload,  to land without crashing,  if you fly faster!  The sharply restricted payload (78 50 versus 149 metric tons),  makes this option very undesirable,  but discarding it also eliminates a possible landing abort method,  if landing conditions unexpectedly prove adverse at Mars,  such as a giant dust storm with high winds.

Going to Phobos will not help this LMO-impracticality picture.   That slightly reduces the delta-vee requirements to rendezvous with,  and then land on,  the moon,  but it significantly increases the delta-vee requirements needed to reach the surface of Mars.  This has already been thoroughly explored in the article titled “Interplanetary Trajectories and Requirements“,  dated 21 November 2019,  on this site.  Other work I have done and not posted verifies that the least-energy path from Phobos to Mars is a burn to escape from Phobos,  a burn onto a transfer ellipse to LMO altitude,  a circularization burn at LMO altitude,  followed by a deorbit burn,  entry,  and a landing burn.

There are two critical items necessary to make this Starship/Superheavy design concept more practical:  (1) the ability to put closer to 300 220 metric tons of payload in LEO while maintaining an abort deorbit and landing capability,  and (2) coming up with a real tanker design.  Those are in addition to the rough-field landing capability problem,  and the inert mass growth problem that always occurs in experimental flight testing.  You have to increase the size of SuperHeavy to do that LEO payload increase,  so as to increase the staging velocity,  while still maintaining flyback capability for recovery. 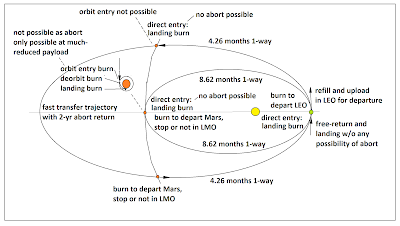 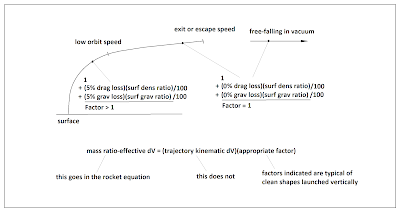 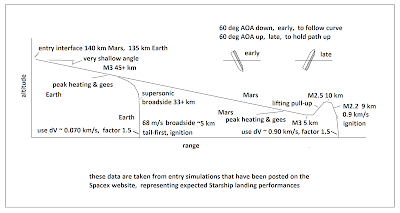 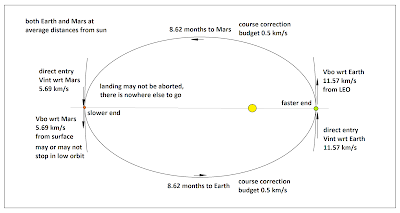 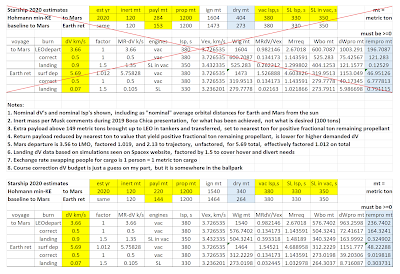 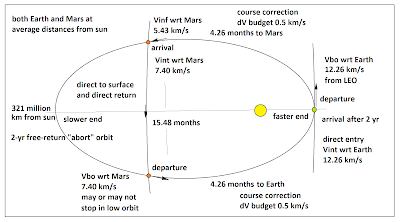 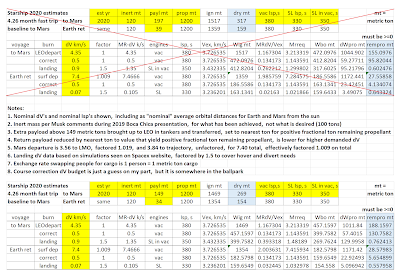 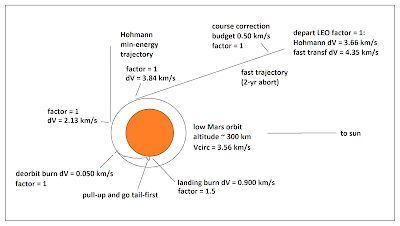 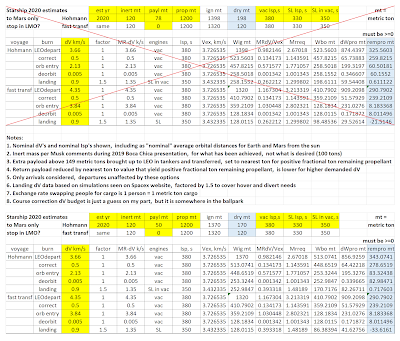 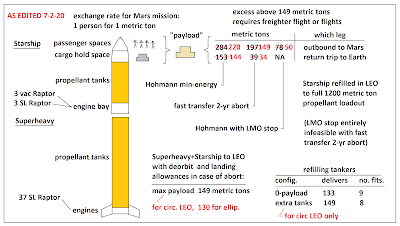