This is a topic that often comes up,  as a potential way to save propellant for arrival into Mars orbit from the interplanetary trajectories.  There are two problems:  (1) Mars’s atmosphere is very thin,  so that the densities effective for drag deceleration at orbital speeds are quite close to the surface,  and (2) trusted sources such as the Justus and Braun tome on EDL (Entry,  Descent,  and Landing) indicate that the density of Mars’s atmosphere at braking altitudes is erratically variable by a factor of 2,  totally unlike the case at Earth.

Discussion of the Problems

The first problem brings up the risk of accidentally impacting the surface of the planet,  since that surface is so closely adjacent to any practical aerobraking trajectories.  Very precise trajectory control is required to make this work,  much more so than here at Earth.  It is not impossible,  but it is very demanding,  when this technique is to be used at Mars,  which lacks the navigation satellites we have here at Earth.

The second problem has two impacts:  (1) factor two density variation is factor 2 drag variation,  all else being equal,  which may be too large to assure aerobraking into orbit,  and (2) since the variation is erratic,  you cannot know the density that exists at aerobraking altitude until you are actually in the atmosphere attempting your aerobraking.  It will show up in your reduced speed and the peak gees decelerating to it.

Conditions of the Approximate Analysis

The altitude for “entry interface” at Mars is generally considered to be 140 km,  per Justus and Braun,  who recommend using 135 km for Earth entry interface altitude.   On Earth,  peak decelerations are up nearer 80-90 km,  while these occur lower on Mars,  primarily because Martian surface densities look like Earth densities at 30-35 km altitude.  I picked an arbitrary 50 km for my ellipse periapsis altitude,  to fall approximately in the max braking range on Mars.

For speed at entry interface,  I used the 7.5 km/s that Spacex quotes for its peak entry speed with the Starship design.  That is intended for direct entry from the interplanetary trajectory.  Here I am investigating a braking alternative from those same conditions.  That entry speed corresponds to a velocity “far” from Mars near 5.6 km/s relative to Mars,  which implies a trajectory somewhat faster than a min energy Hohmann transfer orbit.

The remaining variable is the initial braking ellipse orbit apoapsis distance.  To be a ellipse at all,  this must fall between circular at the braking altitude,  and very eccentric with periapsis velocity very close to Mars escape.  I used a 10 m/s difference between escape and periapsis velocity as my largely-arbitrary criterion for the most elongated ellipse that I would consider “stable”.

How the Repeat-Pass Aerobraking Works

The way this works is the vehicle approaches on a hyperbolic path to pass past Mars at the braking altitude.  As it approaches Mars,  gravitational pull increases its speed to the entry interface value,  approximated as:  Vint2 = Vinf2 + Vesc2,  where Vesc is computed at the braking pass altitude.  Vint is the interface speed,  and Vinf is the speed relative to Mars “far” from Mars.  For this analysis,  I just set Vinf such that I got Vint = 7.5 km/s.

During the pass,  density and velocity vary,  so drag varies.  There is a drag work integral with path length along the braking pass path.  That integrated drag work subtracts from the vehicle kinetic energy at entry interface,  so that kinetic energy (and vehicle velocity) are lower at the exit from the braking pass.  That final velocity must fall in the range of feasible periapsis velocities for the initial ellipse,  or else you enter direct if too low,  or bounce off into deep space if too high.

Once on a feasible ellipse,  there is drag braking at each periapsis pass,  which reduces vehicle mechanical energy and apoapsis altitude.  After multiple braking passes,  the orbit circularizes at the braking altitude,  and the vehicle then deorbits.  That is the concept behind repeat pass aerobraking.   See Figure 1. 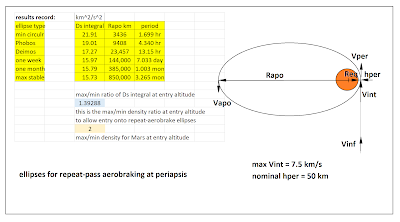 How the Analysis Was Conducted

For the same braking altitude (and it really won’t be,  but we are ignoring that effect here),  the drag work integral could vary max-to-min by a factor of 2,  simply because the density can vary by that factor of 2.  It varies erratically,  and you cannot know what that density really is,  until you have completed the braking pass with the wrong exit velocity,  which is far too late to adjust your braking pass altitude.  The factor 2 variation easily encompasses both unplanned direct entry and bouncing off into deep space.  Therefore you must be prepared to compensate “on-the-fly” as you exit the first braking pass by firing rockets to adjust your speed to the proper (or at least a feasible) value.

It’s not that repeat-pass aerobraking won’t work,  because it most certainly will.  But at Mars,  the control of speed coming out of that initial braking pass requires very precise control and adjustment “on the fly”,  with a rocket burn of some significant size.  That plus the final circularization burn into a stable low Mars orbit will be less than,  but as much as some fair fraction of,  the direct orbit entry burn of almost 4 km/s.

Control is simpler,  and to more certain requirements,  with the orbit entry burn approach.  But if one has real-time velocity information,  and fast-response propulsion,  one can do a real-time-tailored delta-vee burn to exit the initial braking pass with the correct velocity.  You have to plan this for the very worst case,  even if you never use that propellant.

My conclusion is that the risk potential for a fatal outcome is just too high relative to the feasible braking orbit entry conditions,  unless you bring extra propellant and some very sophisticated,  precise,  and fast-acting controls.  This is not a technique that should be preferred for use at Mars!  One would have to add some serious rocket braking to prevent bouncing off,  or unintentionally landing direct but too steeply.  If you have to do that,  then you might as well just do rocket braking into orbit under much more certain control.

The details of the calculations are shown in Figures 2 through 4.  These are spreadsheet images,  two images per figure.  I looked at a total of 6 ellipse conditions,  to see what the trend shapes looked like.  The approach to the bounce-off point,  just past the most elongated orbit,  is sort-of asymptotic in terms of kinetic energy,  so that energy estimate is insensitive to the exact max apoapsis criterion.

Remember,  because of unpredictable upper-atmosphere density variations,  the drag integral can vary through a factor of 2.  The ratio of drag integrals leading to a feasible ellipse is only 1.39.  Even if you do not care what ellipse you end up on,  the chances are very significant that you could see a fatal outcome (unintended direct entry or bouncing off into deep space),  without a significant propulsion allowance for adjusting speed as you leave the initial braking pass.

If you care which ellipse you end up on,  you simply must have propulsive speed adjust capability coming out of that first braking pass. Either way,  the propulsion must be sized for the worst possible case,  which Murphy’s Law says will happen.

Figure 2 – Spreadsheet Images for Circular and Apoapsis at Phobos