Update 6-14-2020:  3 paragraphs in original article highlighted,  and two more appended below as part of this update,  which addresses the recent spike-up in cases as we re-open.


When there is a new disease,  for which there are no treatments (other than support) and no preventatives (such as vaccines),  there is only quarantining,  at one level or another,  available to use as a tool to stop the spread of the disease.  This tool is centuries old,  but it works,  and combined with modern knowledge of the microbe theory of disease,  it can be rather effective.

That’s the result of the accumulation of factual knowledge through science.  There are no “alternative facts”,  there are only lies.  It is now,  and it always has been,  best to use what we know to be true.    And there is no better way to know what is true than science!

When this SARS-CoV-2 (“Covid-19”) pandemic started,  we knew next-to-nothing about its characteristics.  Very quickly,  we learned that it is transmitted from person to person by virus particles contained in the tiny respiratory droplets we expel when we breathe,  talk,  cough,  or sneeze.  The virus particles cannot live in the air outside those droplets.  These droplets tend to fall to ground fairly rapidly,  and they can persist on surfaces where they fall,  or are otherwise deposited.

That it spreads in droplets means that face masks are moderately effective in stopping disease transmission,  as the size of these droplets is large enough to be stopped by filter media through which we humans can still breathe.  That would include both paper and cloth masks,  even simple bandanas.  The physics of this says that in most situations,  the mask does not protect the wearer,  but it does protect others from any disease the wearer might have.  Only when up close,  really “in-your-face”,  does the mask significantly act to protect its wearer (such as medical workers).

That these droplets tend to rapidly fall to the ground is the origin of the 6-foot rule (or in other metric parts of the world the 2-meter rule) for physical distance between folks.  If you get closer,  that’s rapidly becomes the “in-your-face” situation.  Like the face mask,  this distancing is also moderately effective at stopping disease transmission.

Now,  acting together,  masks and the 6-foot rule are far more effective at preventing disease transmission than either is alone.  That’s why the CDC recommendations say do both.  It’s an “and” situation,  not an “either-or” situation.  And it is not supposed to be optional:  when I go to the grocery store,  I see too many shoppers not wearing masks,  and getting too close to each other.  Shame!

There is a third thing that can be done,  also moderately effective by itself.  That is wearing disposable gloves when handling items in public that are touched by many.  If you add that to the masks and the 6-foot rule,  there is little risk of transmission of disease,  such as when you go to vote. This would be true even if the crowds were large,  and the voting machines were not disinfected between voters (which they should be).  You will note in some news stories that workers in some businesses are using these three tools together.  Now you know why.

What we have learned over the last couple of months is that this SARS-CoV-2 / Covid-19 disease is more infectious than most ordinary influenzas,  and (more alarmingly) that a large fraction of infected people show no symptoms.  They do not know they are sick with it.  And for a couple of weeks while they have it,  they are spreading it like “Typhoid Mary”.  Not feeling ill is NO INDICATION you are not infected and infectious!  Again,  that’s just a scientific fact.  Doesn’t matter how you feel about it,  it simply “is”.

When this started,  we didn’t know so much.  It was wise to close down all gathering places of any kind where disease might be spread from person to person,  same as in centuries past.

Now that we know as much as we do,  there is no reason these businesses and activities cannot resume,  as long as the transmission of disease is interrupted!  The main tools are face masks and the 6-foot rule,  augmented by gloves and face shields and frequent disinfection,  as necessary.  Every such activity is different.

And it is morally incumbent on the operators of any activity to look closely at what is done,  by whom,  and how exactly it is done,  to determine how best to use these tools to stop disease transmission.  There are a few activities which cannot comply.  For public safety,  these must remain closed.

The ideology-based objections to these quarantining tools and the activity shutdowns have no basis in our law or our society’s history,  dating back to before the founding of the Republic.  Public health has always taken precedence,  even in George Washington’s revolutionary army.

There is a longstanding legal tradition that my right to swing my fist ends before I strike you with it.  Likewise,  your right to behave as you wish ends before you infect me by your behavior.  So,  wear the damned mask!  Stay 6 feet away!  Don’t open your business until and unless you can stop disease transmission in it.  Simple as that!

It could be a lot worse.  There are diseases (like chickenpox and measles) which can exist as bare virus particles floating around in the air.  No mask you could breathe through,  could ever stop them,  not by a long shot (science again).  Walk into any confined space where such are,  and you will be infected!  If this pandemic were one of those,  we could not safely reopen anything.

And quit bitching about how public health orders violate your rights.  They don’t.  Your rights are NOT absolute.  They never have been.

It’s official,  Covid-19 cases are on a sharp rise after re-opening,  even here in Texas.  Not enough people are taking the mask and 6-foot rules seriously.  Not enough reopened businesses have taken seriously giving their operations a hard look for how to prevent disease transmission.  This is exactly what the medical experts warned us would happen.

Update 7-14-2020:  Well,  we opened up too quickly,  and with too many people behaving like there is no disease problem.  There is no reason why businesses and other things cannot be open,  as long as careful attention is paid to stopping disease transmission.  But too many people are either too stupid to understand the science,  or too incapable of critical thinking not to be deceived by internet lies and conspiracy theories.  The worst of which keep coming from our president and his ardent supporters,  instead of actual leadership in a crisis.  November is coming --- 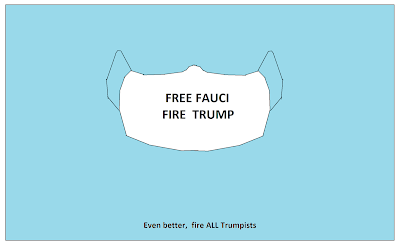