The following four pictures were taken 1-10-2021 at 3 PM,  showing a 3 inch snowfall on the family farm here in central Texas.  This was big snowflake stuff,  with the wetness and cohesion to make good snowballs. 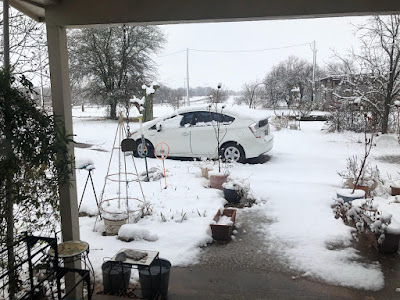 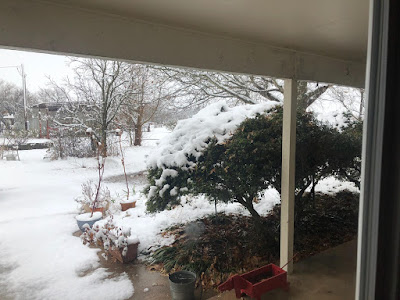 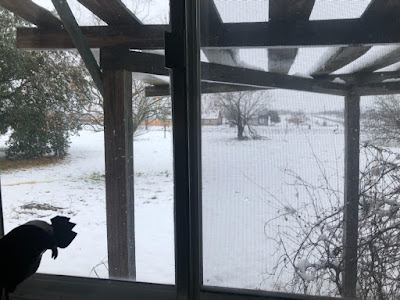 Figure 3 -- Out the dining room window into the back yard,  looking a bit leftward 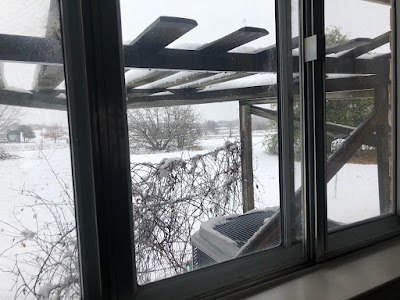 Figure 4 -- Out the dining room window into the back yard,  looking a bit rightward

On the average,  we near Waco,  Texas,  get around 1 significant icing event per winter.  This winter has been very different:  first a real snow storm in January,  then shortly after in February,  a big polar vortex failure brought us 3 events in rapid succession,  starting with an ice storm 2-11-2021,  then another snow storm 2-14-2021,  then yet another ice storm 2-17-2021. 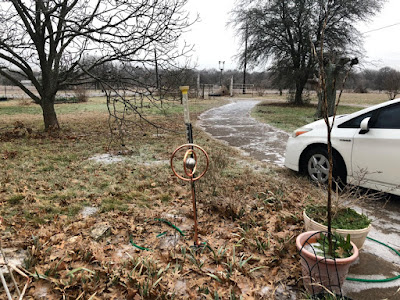 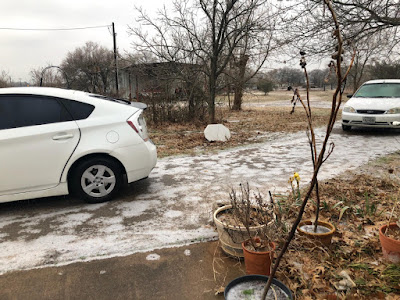 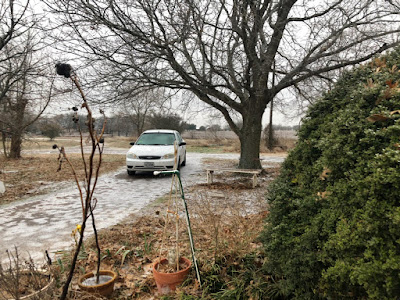 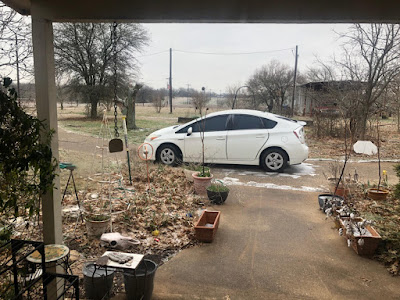 There was no big thaw after this ice storm;  temperatures remained continuously below freezing.  The previous snow was big flakes.  The next was fine powder rarely seen in Teas at all.  It fell atop the unmelted ice from the ice storm.  Temperatures started out in the 20’s for this snow,  falling rapidly into the teens by dark. 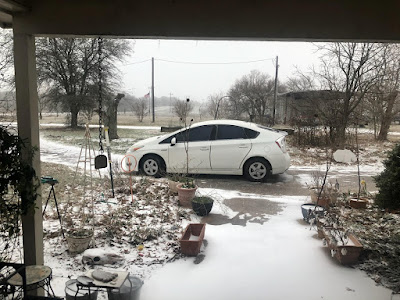 We got about 3 inches of powder snow from this event.  Then it turned very cold indeed,  almost setting all-time records.  Monday 15th was clear and cold,  with a morning low near 4 F.  Tuesday 16th was clear but cold (about 0 F AM then stayed in the 20’s PM;  Waco Regional airport recorded -1 F for the low).  We had been continuously below freezing around the clock for some 5 days by this time. 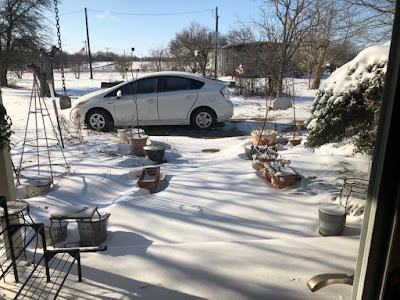 We got hit with another ice storm Tuesday night into Wednesday 17th.  This was not a lot of ice,  but it formed a crust atop the 3 inches of powder snow.  Temperatures did not get above freezing until Friday afternoon 2-19-21 (9 days continuously below freezing,  unprecedented in Texas). 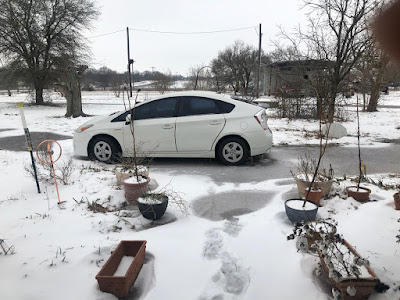 The January snow was one weather system,  and the 3 February events (ice/snow/ice) were one “polar vortex” failure with 3 small systems sweeping across it.  We in Texas set historic records for snowfall and cold during the two systems (4 events in all).  That includes the unprecedented 9 days continuously below freezing,  around the clock.

Many people suffered disastrous and expensive failures because of the sustained cold and the widespread blackouts.  We out here on the farm did not,  fortunately.  The slick roads caused major problems,  and loss of life as well.  Having spent two record-setting winters in Minnesota a quarter century ago,  I had no troubles with the cold or the roads.  (But I learned how to drive on this stuff in the school of hard knocks,  long before ever going to Minnesota.  That’s another story for some other time.)

The long-duration sustained cold is the real reason why the Texas energy grid came very near to total collapse,  with people dying or near-fatally endangered in the cold without power.  Many of the natural gas plants went off-line for lack of fuel,  because the gas well infrastructure and transmission pipelines were not robust enough to resist the sustained and very severe cold.  There may or may not have been troubles at coal plants,  that seems not to be very clear in most of the news reports.

But natural gas dominates Texas generation,  with coal second,  wind third,  and then nuclear.  One nuclear plant had one unit shut down for a bad sensor.  There were several “frozen” wind turbines that went off line (whatever “frozen” actually means),  but ERCOT’s own data says the wind farms were still producing about twice what was actually expected of them this time of year.  The bulk of the problem was fuel delivery interruptions at the gas plants that are the bulk of the Texas generating capacity,  pure and simple.

ERCOT did not cause this crisis with its rolling blackouts,  but nothing ERCOT can do could fix it,  either!  Simply put,  the return of warmer weather,  allowing gas production and transmission to resume,  was what corrected it.  The problem was one of management at many levels (not just ERCOT) not learning the lessons of prior cold weather experience here in Texas,  and elsewhere.

We here in Texas have had grid capacity troubles with polar vortex events at least once before,  and other grids in colder parts of the country also have good lessons to teach about cold weather operation.  Baldly stated,  ERCOT,  the big utilities,  and the Texas government chose not to learn those lessons to reduce expenses!  Which is really why we have had a disaster,  that killed and threatened people.

Meanwhile,  there is a photo/video that has gone viral,  claimed to be of a helicopter spraying de-icing fluid on a frozen Texas windmill generator.   Except that it is not a Texas windmill!  Both Reuters and Associated Press (and many others) have debunked this claim.  The photo is really of a Swedish windmill being deiced,  during the winter of 2014-2015,  some 6 years ago.  Plus,  the “deicing fluid” is simple hot water,  although it is heated with an oil burner (you simply use what you have at hand,  to get the job done). 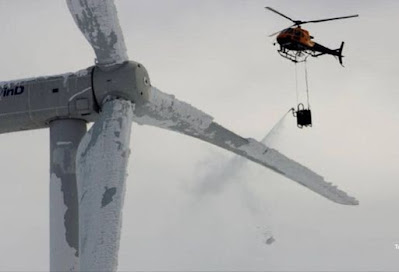 Based on what I have seen from multiple sources,  about half the windmills in the west Texas wind farms were indeed shut down for cold weather problems.  Even so,  according to ERCOT’s own data,  the remainder was generating about twice what ERCOT expected from the wind farms.  But even if all of them had been generating,  it wouldn’t have been enough:  wind is but 20-25% of Texas’s capacity.  We were short more than 30% of Texas’s generating capacity.

The real problem is that over half our Texas generating capacity is natural gas plants,  and about half of those got shut down for lack of fuel.  When you add in a few coal plants that had cooling water lines break in the cold,  and one nuclear unit shut down for a bad sensor,  plus some windmills frozen,  you get exactly what we saw happen!

This could not correct itself until the frozen well heads and transmission pipelines unfroze.  That simply required warmer temperatures.  It will happen again next time the polar vortex fails in a big way like this,  unless “we” harden the natural gas system against long-duration cold weather.   That technology is well-known,  but was NOT required in Texas.  In hindsight,  it should have been required.

There were and still are two fundamental changes needed for the way Texas manages its electric grid.  One is to add an incentive for the addition of generating capacity,  not just the sale of electricity from existing capacity.  That would also help with the perennial summer capacity vs demand troubles,  as well.  The second is far more important:  make the voluntary best practices for cold weather robustness into mandatory regulatory requirements.  Had that already been in place,  the 2021 polar vortex event would very likely not have been the disaster that it was!

I suggest very strongly that you consider that ugly little fact,  before re-electing the same politicians that let this happen to you.

What's all over the media are the CYA ("cover your ass") lies about who is responsible for the cold weather grid disaster.  There are those who persist in trying to pin the blame on the wind farms,  even though the truth about the real problem has already been exposed. And that is exactly what I described in the article:  frozen natural gas supply sources and transmission lines account for at least 30% of the 40% of Texas's generating capacity that shut down,  for lack of fuel.

That's the proximate cause of the grid disaster,  but ultimately the source of this traces to improper regulatory requirements management by the state government.  And by "government",  I mean ERCOT,  the PUC,  the governor's office,  and the legislature.  Plenty of blame to go around.

The free market is the most powerful engine of creation yet devised by humans,  but it devolves into piracy and slavery if there are no enforced rules to constrain it to serve the public interest.  We humans have known that for some millennia now,  political lies and ideology favoring an absolutely-unregulated market notwithstanding.

You are already seeing hints of the piracy aspect in the price-gouging on utility bills and for natural gas prices.  There will be more.  That money is going into executive's pockets,  not into correcting the problems we faced. You are also seeing it in the arguments over exactly who is going to pay for all the plumbing and water damage caused by the extended power outages. And nobody has yet brought up responsibility for the lives lost and injuries suffered.

I suggest you remember this disaster next election.  The politicians you have been re-electing,  and their appointees,  are the ones who ultimately caused this. It should be painfully apparent to anyone,  that it is way past time to try somebody else for a while.

It's not quite 2 weeks since the ice from the awful storm melted.  Here is a view of my front yard,  showing the green in the ground cover.  Spring is here!  (Although it frosted this morning,  too!). 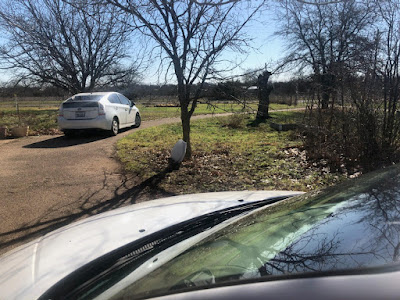