My wife created this and posted it on her Facebook page.  It’s just too good not to re-publish here. 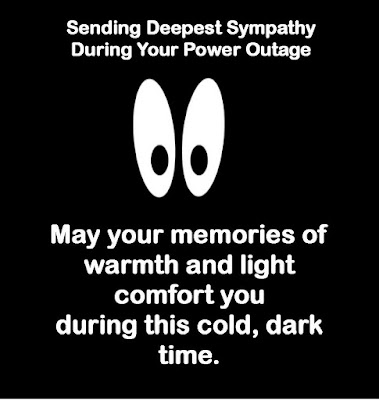 Yesterday,  the morning low was about 4 F.  This morning,  Waco airport reported -1 F,  a record-setting number for these parts.  We have had about 3 inches of snowfall up to this point,  with some sort of ice storm predicted tonight.

Our personal experiences a quarter century ago,  during two hundred-year-record-setting winters in Minnesota,  had us better prepared than most of our neighbors,  I suppose.  Nothing in the farm shop froze.  I had hot lights and a heater running in there,  plus faucets dripping and a toilet drained.

On the house,  we had one grey water outfall freeze up,  which I thawed today with pots of hot water,  followed by seriously abusing the wife’s hair dryer.  I wanted to use my little propane torch,  but that had been cold-soaked to about 0 F,  and so the propane bottle had no vapor pressure:  nothing came out when I opened the valve,  at all.

The tap on my beer keg refrigerator in the garage also froze.  I thawed it today,  too,  after several hours’ exposure to the heat from an old-time incandescent light bulb.

The Texas power grid seems to have had a serious problem.  Grid demand got close to grid generating capacity,  so ERCOT ordered the utilities to do rolling blackouts to reduce demand.  These were supposed to be power outages of 15-45 minutes’ duration,  at any given location.

It didn’t work out that way.  The rolling blackouts,  rather than preventing a crisis,  seem to have precipitated one.

The evidence is that multiple power plants have gone off-line,  reducing grid generating capacity very significantly,  and forcing the blackouts to be lengthy and widespread.  No one seems to have a believable answer for why this happened.

There was a lot of talk about frozen wind turbines out on the wind farms in west Texas,  but when I searched,  the answer was the opposite.  Despite some windmills shut down for icing,  the actual output from those wind farms seems to be about twice what anybody had expected.

Then talk seemed to shift to frozen natural gas lines stopping fuel flow to the power plants.  That seems to be a real issue with the natural gas-fed plants,  but it does not explain the stoppages at coal plants,  and one nuclear plant that shut down.

It is possible for the feed pipeline to a natural gas power plant to freeze up,  but not the natural gas pipe to a residence.  If somebody offers you that excuse,  they are lying to you.  Residences have natural gas pipes that operate at very low pressures.  Power plant pipelines operate at several hundreds to a few thousand psi.  That makes a huge difference to what can,  and cannot,  happen.

Natural gas is not just methane,  there is also significant ethane,  propane,  butane,  water,  carbon dioxide,  nitrogen,  and often even some sulfur compounds.  Natural gas that is fit to be used as fuel has been processed to be just methane with some ethane,  and only the merest trace of water.  The rest has been removed.  Crummy fuel is cheaper,  but has water in it.  That water content makes a difference!

For gas transported at high pressures,  any obstruction causes a pressure drop,  and the corresponding temperature drop can be quite significant when that happens.  That temperature drop causes ice to form from the water content,  which can obstruct the pipe further,  or even completely.  It takes a lot of heat to melt that ice,  once it has formed.  If you have ever thawed a frozen pipe yourself,  you know that statement to be true.   And,  the bigger the pipe,  the tougher it is to deal with.

Making things even worse,  the water can combine with the ethane,  propane,  and butane content to form things called “clathrates”.  These can freeze to an ice-like substance,  even easier than water can freeze to ice.  The cheaper and crummier your natural gas,  the more likely these contaminants will cause trouble during extreme cold weather.  That’s just physics and chemistry.  You can’t fight it.

While all of this has been going on,  fossil fuel prices have surged higher,  especially natural gas prices.  What was about $3 per million BTU has suddenly surged as high as $600 per million BTU.  Whether any of this is price gouging,  or illegal speculation,  I do not know.  But that possibility is real!

All in all,  I smell a rat here somewhere.  There are many questions that need to be asked of ERCOT,  and of the utility giants.  We will see if anybody we elected actually asks.  It is their sworn job,  you know?

Update 2-19-21:  the funny above is not meant to minimize the disaster that unfolded in Texas.  See the discussion of that disaster in the second half of the 2-19-21 article just above this one.