Here are some cartoons related to the recent peaceful transition of power 1-20-21.  These were circulating around on Facebook,  where my wife found them.  The first one pretty much speaks for itself,  except that I think it is understated (“it’s way past time” would be closer to correct). 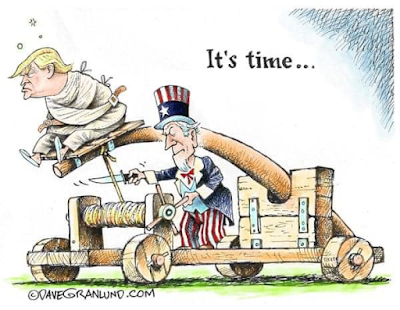 About the only change I would make to it,  would be to show the target somewhere in the background.  That would be the “trash heap of history”,  complete with “bad smell” wisps.  I agree with many others who are already saying that Trump will go down in history as the worst president we have ever had.

That “worst” rating would specifically be for inciting an insurrection as an attempted coup on January 6th,  trying to stay in power after his term was supposed to be over on the 20th.  Insurrection is not technically treason under the law,  but it is very close to treason,  and the same law covers both offenses (18 USC part 1 chapter 115 sections 2381 and 2383).  What is in the House’s article of impeachment for inciting the insurrection,  is essentially language from that law’s section 2383.

You can see how much he really cares about the consequences to the followers he incited to violence:  none of the insurrectionists were pardoned,  yet he very publicly reversed himself away from the failed insurrection,  but only after it failed.  That leaving them “out to dry” is the hallmark of the “fearless leader” in most fearless leader cults.  A related article on this site discusses those (see list below).

And that incitement was not just what he said the morning of the insurrection,  but what he said every day,  from election night forward to the 6th.  Unfortunately,  he was not alone in saying those things.  More unfortunately,  the followers believed them.  And too many still do.  While Trump himself is gone,  the threat of far-right violence continues.  This is evidenced by continued warnings from the FBI and the Department of Homeland Security.

The next funny is just a play on words,  albeit quite the good one.  It does bring up a valid question to discuss,  though. 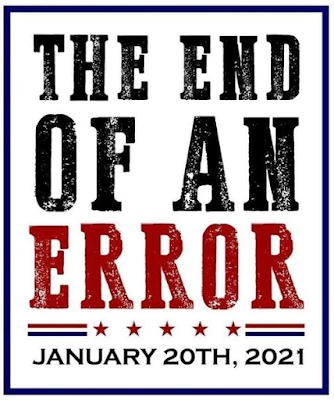 That question is:  how does the Republican party live down its (in hindsight very egregious) error in letting Trump be its nominee for the 2016 election?

Back in 2016,  a whole lot of people were bamboozled into voting for Trump,  despite having already seen exactly what kind of person he really was,  on his reality TV show.  What you saw on his show was exactly what you would get from him as president:  a total asshole.  And so he was.  For 4 long years.

After 4 years in office spreading lies and chaos,  doing far more bad than any good,  and stirring up the far-right extremists in this country,  those extremists came to dominate the Republican voter base,  and so elected fellow extremists to a fair fraction of Republican-held offices in the House and Senate.

Most of the more conventional,  more centrist Republicans have either died or retired,  or were primaried-out for not being sufficiently extremist.  Most of the rest sold themselves out to the extremists,  just to stay in office.  When you combine that extremism with the long pre-existing “party-of-no” approach (for which you can thank Newt Gingrich,  Paul Ryan,  and Eric Cantor in 1992),  you get a very toxic brew that stops nearly all debate and compromise,  thus paralyzing Congress.

And you get a Senate that may not convict Trump of the otherwise slam-dunk insurrection impeachment charge,  because too many of them are either rabid Trump supporters themselves,  or are extreme enough to prioritize opposing Democrats over what would be so obviously right for the country.

That extremist takeover has to go,  or it will be the end of the Republican party.  And that would be something I’d rather not see happen.  Read on.

A key diagnostic for some degree of extremism to look for is the claim that “all Democrats are far leftists,  or even just plain evil”.  That contention is patently false,  on the face of it,  and is just one of many false beliefs virulently spread on social media and the internet.

Yes,  there are some far leftists among the Democrats,  but there are more centrists than any other classification,  or else Joe Biden would not have been their nominee for 2020!  QED.  It’s really a spectrum and a distribution of belief about how to approach government.  As it should be.  There are no new ideas if there is no diversity of ideas.   You need new ideas when the old ones no longer work.

That’s actually true of both parties,  but the divide between the moderates and the extremists in the Republican party is far sharper,  and the moderates are in the minority,  and have been for a few years now.  Most of the estimates I have seen indicate that 50% to 75% of Republican voters believe some (or all) of the false extremist claims of the Qanon conspiracy theory.  And that’s just way too much!

The country really does need two good parties from which to choose candidates.  With the extremist takeover of the Republicans,  we do not have that choice!  We need that wide spectrum and distribution of ideas for better government,  something that two good parties was able to bring.  We need it again.

And that’s my take on it.  Before you get too upset with what I said,  remember that I am an independent.  I really do wish we had two good parties to choose from,  and I am very discouraged that we currently don’t.

As for the “change” per the title of this article,  the one I want to see most is change in the Republican party from extremist domination back to something “normal”.   We don’t really get to vote for that in the elections,  at least not directly.  So I don’t yet know how that might be accomplished.