Follow-Up on the Japan Nuclear Crisis

The egregious “Chicken Little / The Sky Is Falling” reporting continues unabated over Japan’s nuclear plant crisis. I am getting very disgusted with all the fear-mongering-for-profit.

News media: please learn something about what you are talking about, before opening mouth and inserting foot. The run you have precipitated on anti-radiation iodine pills in the US is completely ridiculous, even insane.

It’s not that there aren’t serious risks at this plant, because there are. But, they have little to do with what gets splattered all over the evening news. Please refer to my previous posting on this subject (15 March 2011), and to figure 1 below.

Even if the reactor cores completely melt down, there is no risk of a Chernobyl-style intense-radiation event. Most, although maybe not all, the intensely-radioactive debris will remain within the outer (#3) containment, even if it is breached.

Breaching the #3 containment into the atmosphere to leak copious amounts of dangerous stuff is extremely unlikely in the extreme. This is for precisely the same reason that most of the fibrous “tire snot” sealing materials stay inside the tire, even after a blowout.

In any event, breaching that #3 outer containment is unlikely, because it is so very tough. This type of concrete and steel construction is pretty much the same as those concrete and steel structures still standing at ground zero of the Hiroshima and Nagasaki atom bomb explosions in 1945.

There, that should “calibrate” your gut feel for just how tough these structures really are.

Breaching the floor of the #3 containment, and releasing dangerous stuff into the earth and groundwater is more likely, but only in the event of a full core meltdown, which is still pretty unlikely, in spite of the severity of the disaster in Japan.

However, this is not atmospheric dispersion, and it stays more or less confined in a definite and geographically-small area. Radioactive fallout from the air is just not a risk more than a few miles from the plant, no matter what happens.

The real risk in this particular disaster is not the reactor and its containment structures, it is the spent fuel rod disposal ponds. These have little or no containment. If they go dry, and the spent fuel rods overheat and catch fire, that really is atmospheric dispersal of some very dangerous stuff.

That is the only thing anybody should be seriously worried about.

There are some lessons to be learned here. They are applicable to retrofits of existing nuclear plants, and to new plant designs. They are also nothing but plain old “horse sense”.

The Japanese plant was designed to withstand a Richter magnitude 8.2 earthquake, and quite successfully withstood magnitude 8.9. However, the geologic record (not the historical record) suggests that the Pacific Ring of Fire experiences quakes substantially above magnitude 9.

Not much can be done to “harden” existing plants. But, pick any number you want for design criteria for future plants. How about 9.5?

The problem in Japan wasn’t so much earthquake damage, it was the tsunami. Nobody planned for a 30-foot wave to sweep away the electrical grid and to disable all the back-up generators and water supplies. They haven’t seen a tsunami like that in Japan since 1700 AD.

The other problem is the lack of multiple containment, around the spent fuel rod storage ponds. This is retro-fittable at every plant in the world today. It should be done as soon as is practical. It’s a safety thing, the “bottom line” is (and should always be) secondary to that consideration. 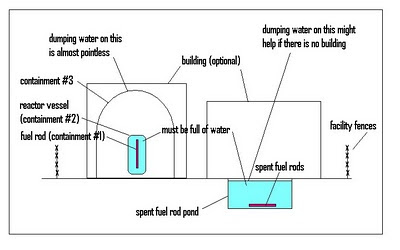