Even after a week, the “Chicken Little / Sky Is Falling” reporting continues on the nuclear power plant accident in Japan. This has (1) completely overshadowed the true disaster (the tsunami which devastated a far larger area at least as thoroughly as the two atomic bombings in World War 2), and (2) has induced people to panic and do stupid things (like buying potassium iodide over here in the US).

There is too much ignorance about nuclear technology and radiation characteristics, out among the population in general, and the media reporters in particular. There is also too much ratings/money chasing sensationalism among the reporters. It dis-incentivizes telling the truth, and that’s a bad thing.

As the two previous articles indicate, not all nuclear radiation is the same. There are different intensity levels and different decay times. There is also a huge dilution effect that renders a potent local release very dilute and relatively inoffensive when spread across an ocean and around the world.

Furthermore, not all human medical responses to radiation are the same. The steady slow accumulation of general “background” radiation exposure has one set of limits, for long-term late-in-life effects. Further, these limits have evolved substantially since nuclear age began. These are depicted in figure 1. The current numbers are 5000 milli-REMS (mR) for adults in any one year, with a lifetime accumulation limit of 1000 mREM x age in years. For minors (under age 18), the limit is 500 mR per year. For fetuses (and thus pregnant women), it is also 500mR per year, with the added restriction of no more than 50 mR in any one month. (See also units of measure note below.)

This 5000 mR annual limit for adults has evolved from earlier, higher limits set when we knew a lot less about the medical effects of radiation. During World War 2 and up to 1950, it was 25,000 mR per year. Between 1950 and 1957, this was reduced to 15,000 mR accumulated in any one year. The current level was set in 1957. The minor and fetus limits are newer. Today, astronauts get to absorb the old World War 2 limit in any one mission, which really means they shouldn’t do that more than once a year.

These exposure limits apply to general background (steady) exposure. That radiation has a natural component and a man-made component. The natural component includes natural radioactive materials in the Earth’s crust, plus cosmic rays from space. It is there all the time, and varies widely from location to location. The average for the entire Earth is in the neighborhood of 240 mR per year, and 300 in the US. Very locally at very few locations (such as uranium mines), it can be 10 or even 100 times more.

The man-made component to background radiation includes the well-known atomic weapons testing fallout, the leakage of radiation from nuclear plant accidents, and leaks from nuclear industry processes in general. When nuclear weapons were being tested above ground 1945-1963, there was a significant radioactive fallout contribution, the nuclear total peaking in 1963 at about 15 mR per year. Since atmospheric testing ceased in 1963, the nuclear total has dropped back to about 0.5 mR per year, practically insignificant compared to the natural background, and that includes accidents like Chernobyl.

It also includes the effects of accidents like Three Mile Island (which leaked almost nothing) and the current crisis in Japan (which has leaked something, but nothing like Chernobyl). This figure alone explains why it is silly to fear radiation exposure in the US, no matter what happens in Japan.

The man-made component of background radiation also includes what amounts to fallout from the burning of coal for electric power. Radioactive elements are included in coal deposits, and these are in both the gas plume and especially the fly ash. About 1/3 (around 120 mR per year) of the total background comes from coal plants. Most folks do not know or appreciate the fact that coal plants are a greater radiation hazard than all the nuclear bomb explosions or reactor accidents that ever were, combined. But you can clearly see it in figure 2.

The other exposure isn’t really background, because not all of us are exposed to it: medical imaging that uses radiation (X-ray or nuclear radiation). This can be up to around another 100 mR per year. This wasn’t as widespread decades ago, and a lot of these technologies didn’t even exist then, so in figure 2, I only show this on the modern exposure. 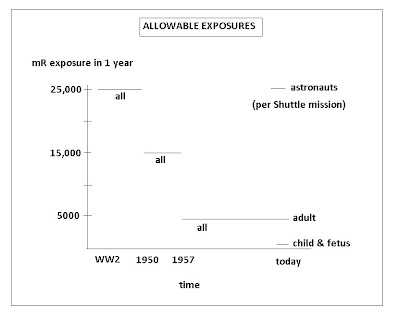 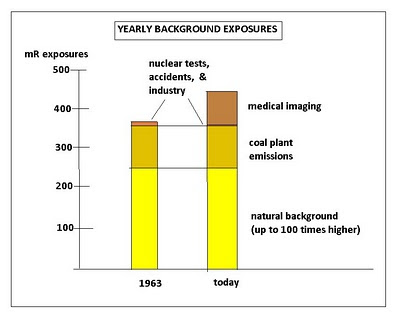 Figure 2 – Typical Background “Then and Now”

Nuclear bombs and reactor accidents release localized high doses of radiation that decay over time, as depicted in figure 3. These present risks of relatively prompt casualties, as well as enhanced risks of long-term injury. The human medical response to this type of incident is simply different. The arbitrarily-chosen standard is the dose accumulated in one week (168 hours). Table 1 is an abridged description of these effects. These take the form of a list of mR per hour rates, with the total dose absorbed (not shown) being the average hourly rate multiplied by 168 hours. (These weeklong accumulations are far higher than any yearly background exposure limits, even from World War 2.)

The peak hourly rate is crudely about twice the average hourly rate. Peak hourly rates are directly comparable to hourly dose rates reported or predicted for the fallout from nuclear weapon explosions. For bombs ranging from 200 kilotons to 1 megaton yield, “very close in” (a few miles) the typical peak dose rate is around 500,000 mR per hour within 1 or 2 hours of the blast. “Far away” (dozens to hundreds of miles) the peak dose rate is closer to 500 mR/hour, something like 9 to 14 hours after the blast. Decay to far more survivable levels happens in a week or three. Local leakage exposures from the worst nuclear reactor accidents are hundreds of times less intense than that from bombs.

Say the average hourly dose rate was 179 mR/ per hour, and this was received over one week. The total absorbed dose would be some 30,000 mR. Compare that to the World War 2 dose of maximum 25,000 mR in one year. It is 5 times the modern limit of 5000 mR per year for an adult, and 50 times the modern limit for a child. Close to a major event, you can accumulate more than a year’s dose very quickly. This stuff is very dangerous, make no mistake about that. 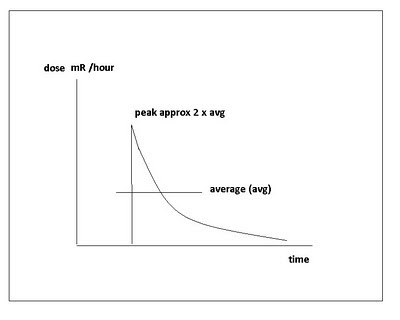 Table 1 – Medical Consequences of High-Level Short-Term Exposures (Abridged) (click on table to see a larger one, browser "back" returns you to article) 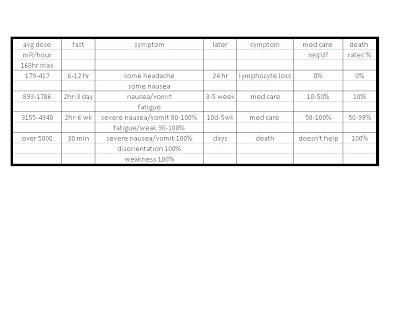 Conclusions Regarding the Dangers Posed by the Japanese Reactor Accident

The workers in the plant in Japan trying to rectify the situation are at very serious risk. Adults a few miles away are at only a little risk, but infants and fetuses are at some risk. Dozens to a hundred miles away from the leaking plant, there is almost no risk at all from airborne radiation. The only credible risks would be contaminated food or water, and they’re fairly small, excepting maybe for infants.

Quite frankly, the human-made background radiation from coal plants is the more serious risk.

A Note On Units of Measure
There are specific definitions for units of radiation known as the “Roentgen”, the “rad”, and the “REM”, but quite frankly, they are all equivalent. In the literature, they are all reported as the abbreviation “R”, reflecting that interchangeability. The milli-REM ( mR) used here is 1/1000 of a REM (or rad or Roentgen). Two other common units are the Sievert (Sv) and the Gray (Gy). Effectively, 1 Sievert is 100 R, and so also is 1 Gray. The Sievert is actually 100 REM while the Gray is 100 Rad, but effectively the REM and the rad are the same (just “R”).

A Roentgen is the energy of gamma radiation contained within 1 cc of air. A rad (radiation absorbed dose) is the radiation energy transferred to some mass of material, typically for us, a human. REM (Roentgen equivalent man) is the rad dose multiplied by a quality factor that models the biological impact. For gamma radiation and beta particle radiation, the quality factor is 1 (1 rad = 1 REM).
Posted by Gary Johnson at 7:25 PM