Corresponding with other space travel enthusiasts on the New Mars forums, I have run across the idea of using the hydrostatic pressure of water, as a pressurizing medium, in which to live on Mars. I was at first a bit skeptical of the idea, but the more I thought about it, the more its practicality became apparent.

With some simple earthmoving activities, it would indeed be fairly easy to transform a suitable large ravine or smaller crater into a suitable lakebed. The frozen nature of the surface of Mars pretty much makes that lakebed impermeable.

With the application of energy, ice could be mined from existing deposits, transported to the lake bed, and melted. This filling process would have to take place under a surface icepack layer, to prevent the water (triple point: 0 degrees C at 6 mbar vapor pressure) from boiling away into the extremely low pressure, very dry, cold Mars atmosphere (around 7 mbar, 0% humidity, subzero).

Once the lake is filled, the icepack itself could be stabilized against sublimation by burial under a Mars regolith layer, mostly the spoils from the creation of the lakebed. Done in an engineered way, this provides a stable pocket of deep liquid water, of increasing hydrostatic pressure with depth.

Adding organic sediments to the lake bottom would enable the start of an aquaculture farming enterprise down in the lake. This would also require the installation of artificial lighting, both for photosynthesis, and to keep the lake from refreezing.

The pressurized habitat accompanying this farm would necessarily be two levels (or more). One level provides surface access for personnel in appropriate vacuum suits. The other provides access for wet-suited scuba divers into the lake, which provides the needed compression on their bodies by simple hydrostatic pressure.

The submerged portion of the habitat is the shelter location for radiation protection during solar storms. It is under a thick cover of regolith, ice, and water, which is the real shielding. A meteor strike would be self-healing, in that the hole would soon freeze over, needing only reburial with more regolith.

A concept sketch of such an aquaculture lake on Mars might look like is given below. My thanks to the other correspondents who sparked this little investigation.

For an oxygen atmosphere in the neighborhood of 250 mbar total atmospheric pressure in the habitat, the equivalent water depth at 0.38 gee on Mars would be near 6 or 7 meters. The scuba could be pure oxygen at these pressures, and that level is also compatible with known designs for mechanical counterpressure vacuum suits.

For atmospheres with dilution gases, the oxygen partial pressure needs to be in the range of 200-250 mbar. The total pressure is higher, and so is the required depth, accordingly.

Divers should not risk rising higher in the lake than the appropriate pressure depth restriction, which would include the ice and regolith overburden thickness. So, if the cover on the lake is thick enough, divers can approach the bottom of the ice without pressure suits.

This may actually be the most practical way to effectively-pressurize the enormous amounts of “land” area necessary to do farming on the scale necessary to support a base or settlement. It certainly seems more practical than building immense transparent domes of some kind.

The aquaculture would be a closed ecology, something we have never before successfully constructed. Furthermore, this one would be different than anything we ever attempted in the past. Although, successful inland shrimp farms have been done. That says this technique can be done, if we but learn it.

I see this as one of the possible critical enabling technologies that we would need in order to plant permanent bases or settlements on Mars.

Hmmmmmm. I wonder what a bulldozer designed for Mars would look like?

Update 1-26-13:  See "Aboveground Mars Houses" dated 1-26-13 for a pressurizable structure approach in which people might live,  garden,  and farm land-dwelling plants and animals. 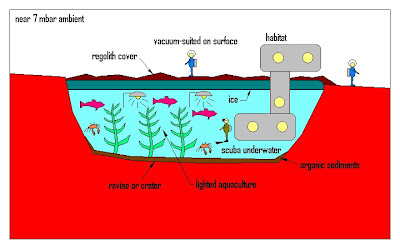 (click on this image to see an enlargement)
Posted by Gary Johnson at 1:28 PM