At TSTC, we have a welding student, Justin Friend, who has built some valveless pulset engines for a personal hobby. I have already posted some of his initial accomplishments with his first engine previously. That posting is titled “Student Pulsejet Project”, dated 12 November, 2011. Just scroll down, it’s not far below.

Justin Friend has since built a second, much larger valveless pulsejet engine. That unit needs to be “tuned-up” a bit before he can demonstrate it. It is very large, as Figure 1 shows. That’s Justin standing by his truck. The big engine is alongside the golf cart with the little engine, both in the bed of his truck.

This young man is looking for sponsors so that he can continue building and operating these unique jet engines. If you readers have anything to offer, contact me by email or by the “comments” here. He also graduates in May, and clearly does very good fabrication and welding work, as these accomplishments testify. If any of you readers might be interested in hiring him, again, let me know by email or in the “comments” here. 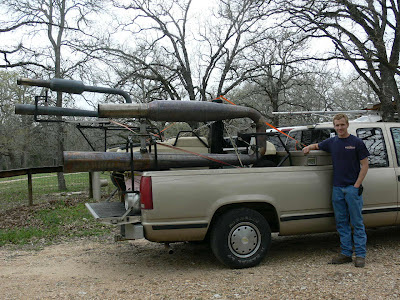 Local Experimental Aircraft Association (EAA) chapter 59, at the McGregor airport, invited Justin to demonstrate his pulsejet golf cart last Saturday morning, 3 March 2012. That event was very well attended, and the pulsejet golf cart was a really big hit with this experimental airplane crowd. There’s just not much that’s more fun, than converting perfectly good fuel into fire, smoke, and noise. This is especially true if you get to drive it around while doing it. Figure 2 is a typical view of the crowd. I’m in the straw cowboy hat chatting with the old guy with the long white hair. 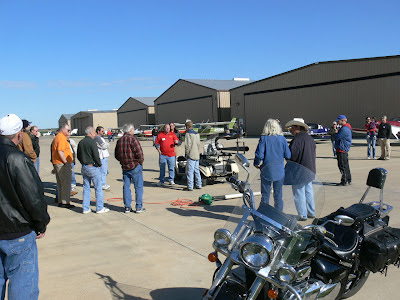 Figure 2 (P1030916.JPG) – The crowd talking with Justin before the demonstration

In the next photo (Figure 3), Justin is getting ready to start the pulsejet on the golf cart. He’s hooking up the ignition. I’m telling folks to plug their ears against the noise. The leaf blower on the pavement is the source of the starting air. Once it starts, the ignition and starting air are disconnected, and the engine runs all by itself. This one runs on bottled propane, just like a barbecue grill. 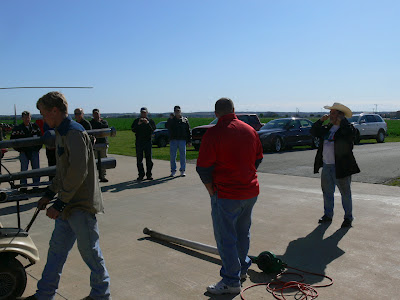 Figure 4 is Justin getting into the golf cart, to make his first run up and down the rampway between the hangars. The barrel in the cart is a big propane cylinder. That’s the fuel supply. The engine throttles up and down by raising and lowering the propane feed. The pulsejet is the only motor the cart has. No battery, no electric motor. Just steering and brakes intended for low-speed driving. 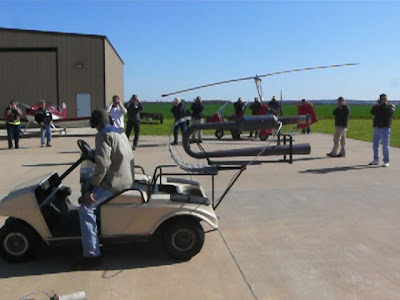 The second run, I drove it, but I switched hats, as you can see in Figure 5. It accelerates away pretty slowly at only 50 pounds of thrust maximum, but I got it up to around 30 miles/hour before turning around. That’s a bit much for the steering and the brakes on this old golf cart. You can see the orange glow of the hot pulsejet tube. Justin made it of 304 stainless sheet. The piece of old scrap barn tin between me and the tube keeps the radiant heat off the driver quite effectively. 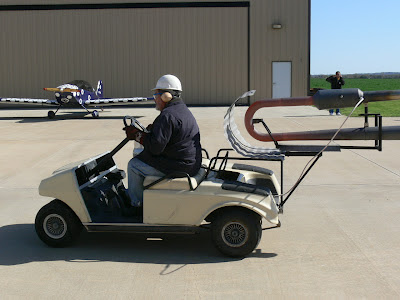 Justin later went flying with Brad from TSTC’s Aviation Maintenance department, who is also an EAA member. Brad made the third run up and down the rampway. Like me, he got it up to a pretty good speed. Figure 6 is a good photo of Brad, waiting to start the engine. 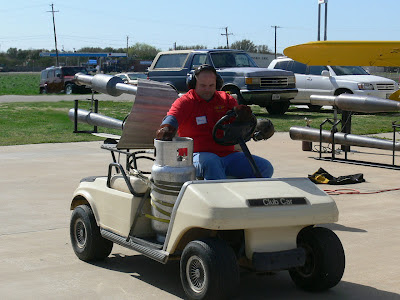 These photos were all taken by Justin’s father, who also took some video clips. I put three of the video clips here. The first one, Clip 1 (P1030925.MOV) is of Justin starting out on the first run. He starts out at low thrust, accelerating rather slowly initially, and throttles up slowly as he pulls away. Clip 2 is from my second run, coming back to the EAA hangar, and turning around. Clip 3 is Brad returning at a pretty good clip from his run. There are some aircraft moving on the rampway in the background (fear not, we stayed well clear).