On Iran and the Bomb

I hear a drumbeat for war with Iran over its acquisition of nuclear weapons. This comes from Israel, several other countries, and our own political right wing.  See also "Third North Korean Nuclear Test" dated 2-15-13 above.

Israel, I can partly understand. Their arsenal is much smaller and less capable than ours. If, and only if, Iran is trying to use atomic bombs, then taking out Iranian nuclear facilities makes sense for them. This includes threats to use, as well as real use.

The other countries have their own decisions to make. Our policy is that “Iran shall not have an atomic bomb”, and “all options are on the table”. I submit that we are way too late for that.

For some years now, the Iranians have been acquiring the technical know-how and the hardware to make both reactors and their own nuclear reactor fuel. Their reactors (plural) are now in operation, and so is their uranium enrichment effort.

There are multiple ways to “enrich” uranium, but the most popular one today is gas centrifuge technology, which works approximately like the centrifuges used in blood test work. For the enrichment process, this involves the use of aluminum tubing (but then so do a lot of other things).

It’s just more passes through the same “still”, or somewhat fewer passes through a better quality “still”, to produce 50+% U-235. In other words, there is no difference between the technology required to build crude, first-generation atomic weapons, and the technology required to build atomic electric power. The politicians are lying to you about there being some difference.

It has also been public knowledge since the mid-1950’s that the Hiroshima bomb (“Thin Man”) was two pieces of enriched U-235 brought together by a piece of dynamite behind one of them. They didn’t even test this in 1945, they already knew it would work, they just dropped it on Japan. The more highly enriched beyond 50% U-235, the smaller the two pieces can be. See following the data from Wikipedia that describe “Thin Man”, our Hiroshima two-piece uranium bomb: 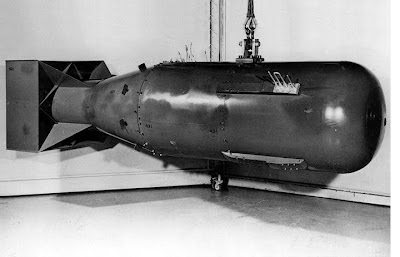 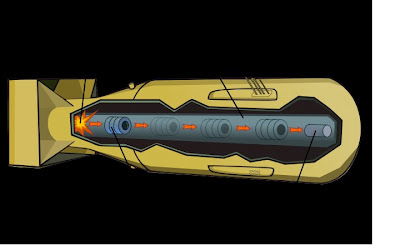 What that really says, and what the politicians do not want you to know, is that anyone operating a reactor on fuel they made, can build a crude “Thin Man” type of bomb. This includes Iran, who has been running a reactor they fueled themselves, for a few years now.

That there is supposed to be a difference between peaceful atomic power and atomic weapons is nothing but a convenient political lie, there is no difference. The folks that make and sell enrichment equipment simply want more customers. They own the politicians, so the political lie disguises what happens when they sell to countries like Iran, North Korea, etc.

It gets worse: the “inert” U-238 component is “fertile”, in the sense that exposure to nuclear radiation in a reactor core transmutes it to plutonium (Pu-239), which is also fissionable, and is actually easier to separate by chemical means from all that uranium.

Anybody operating an enriched-uranium reactor is generating plutonium. Fissionable plutonium is both a very good reactor fuel, and a very good bomb-making material, if you have the know-how to set it off. That is the key!

Again, all of this has been public knowledge since the mid-1950’s, I am revealing no state secrets. You might ask how I know of this: I had to understand the warheads of the missiles that I designed as an aerospace defense weapons engineer, long ago.

Plutonium bombs are a lot more difficult to detonate, requiring a very precise implosion wave to bring them to critical mass. This is the “Fat Man” bomb, which we did have to test in the New Mexico desert, before dropping it on Nagasaki, Japan.

Exactly how to do that is the state secret that the Rosenbergs died for, and I will not reveal it, either. It is not a secret that you learn from enriching your own uranium. The Iranians do not have this secret. See the following data from Wikipedia describing our “Fat Man” Nagasaki plutonium implosion bomb: 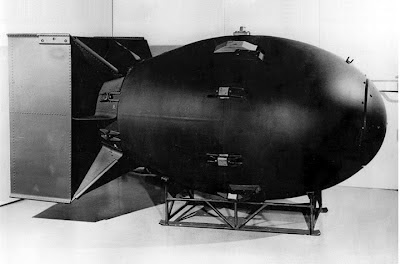 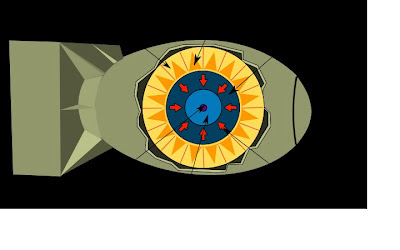 So, the Iranians already have nuclear weapons, contrary to the public pronouncements, but what they have is the crude two-piece enriched-uranium bomb. And only a very few of those. Yield might be in the range 5 to 50 kilotons, roughly the same as our Hiroshima bomb (15-25 kiloton). The recent earthmoving activities photographed from space at one of their nuclear sites very probably are an attempt at hiding the work on a plutonium implosion bomb trigger.

The Iranians already have a satellite-launcher rocket. We already know that any launcher is also an ICBM, and vice versa, because we ourselves “already did that” in the 1950’S. But, precision guidance, that is another matter entirely. The Iranians cannot precisely hit a city, not yet.

So, what could the Iranians actually do with a crude, low-yield, imprecisely-targeted atomic bomb capability? Scare the crap out of the Israelis? Yep. Hit one of Israel’s cities? Maybe, but unlikely. Hit one of our cities? Not very likely at all.

The Israelis have had crude nuclear weapons for many years now (first test ca. 1979, observed in the South Atlantic by one of the early VELA satellites, although that detection has been officially denied for decades). I estimate they might have around 100 such bombs.

If Iran flings one of a very few atomic bombs at Israel, what do you think is going to happen to Iran? Israel will destroy them. Those idiots in charge of Iran know that, no matter how extremist they might be.

Could Iran hurt us with a crude nuke, if backed far enough into a corner to actually fling one out of extreme desperation? Yes, but not by the blast, its yield is too low, and their targeting is imprecise.

There is an “EMP” effect of a small nuke detonated in space 100-500 miles up, over the center of the North American continent, known since the early 1960’s. It destroys all solid-state electronics: cell phones, TV’s, computers, and car ignitions. Devastating, but not very lethal. And, very imprecise guidance is all that is required. Iran actually could do that.

Iran has a single handful of low-yield nuclear weapons. We have over 1000 of them, all 100+ kiloton high-yield weapons, and we have very precise means of delivering them. If they hit us with that EMP attack, or with a “terrorist” suitcase nuke, what do you think is going to happen to Iran?

No matter how idiotically-extremist Iran’s government might be, they already know that outcome: death to nearly all in Iran, almost none in the US.

Is the government of Iran really idiotically-extremist? Yes. So what?

Are the Iranian people decent folk? Yes. We do not need to kill them.

Let the sanctions work, and forget this political drumbeat for another war. All it is doing is raising your gasoline prices due to war fears. Most analysts agree that is the major factor behind the last few month’s price rise.

It is too late to stop Iran from obtaining atomic bombs, they already have a couple of small ones. The time to fight is when they use one, or even threaten to use it. But not till then.

After 5000+ of our children dead, haven’t you had enough of wars in the middle east? I certainly have.
Posted by Gary Johnson at 8:33 PM