“Icecrete”, a Substitute for Concrete as a Building Material on Other (Colder) Worlds

I’ve been considering what might be a good substitute for concrete, as a structural material, for use on places like Mars, the moon, and the near Earth objects (NEO's; asteroids and comets in the inner Solar System).

The fundamental idea is easy production from maximum use of local materials, namely rocks, rock dust/sand, and ice. Most of these worlds have those materials in abundance. Most are very cold, at least in the shade. Shipping stuff from Earth is very expensive, yet the construction need is real: landing facilities, buildings for bases, roadways and buildings for outposts, eventually colonies.

I'm thinking of an analog to the Pykrete that was proposed in WW2 for the "Habbakuk" iceberg aircraft carriers. I found that Pykrete formula: 80% ice, 20% wood pulp fiber. I also found out that they tested it in Canada with a small prototype boat during WW2.

It was almost as strong compressively, and about as resistant to bullet impact, as plain concrete. It did have a tendency to sag (creep), so reinforcement was mandatory. It was slower to melt, with the right kind of filler. Other people in later years using different fillers did not achieve melting resistance.

This concept led me to the concept of "icecrete" (for lack of a better name). You barely melt some local ice, and add local sand and rocks as aggregate, just like concrete. These local aggregate materials will need to be sieved for appropriate sizes, and the rocks tumbled for correct non-angular shape. You then make the mix just like concrete here, adding just enough water to the dry ingredients to barely fluidize the mix to a thixotropic paste. Then you pour it into forms, just like here, and let it freeze in the ambient cold. 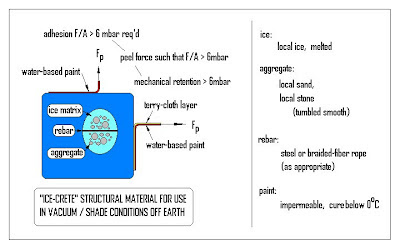 One must coat the surface to prevent sublimation (that is a whole other problem to solve). This sublimation problem is ambient water vapor partial pressures below the sublimation vapor pressure of the exposed ice in the “icecrete”.

If the ambient atmospheric pressure is low enough (or zero, as on the moon and NEO’s), there is no countervailing water vapor partial pressure to prevent exposed ice sublimation. Thus a coating is required, one which acts as a barrier between the ice matrix and ambient conditions. This barrier’s adhesion to the ice surface must exceed the vapor pressure exerted by the ice at its temperature (6 mbar max at 0 degrees C max). 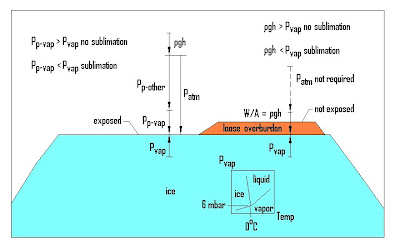 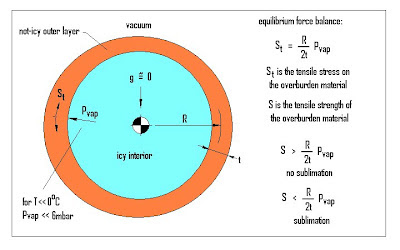 In “icecrete”, there's less ice and more filler than the old Pykrete formula, and in "icecrete", the filler is very hard, and also shaped very differently. I'm only guessing that it may be as strong as, or even stronger than, plain concrete. The higher aggregate content should reduce sag (creep). However, those experiments need to be done!

Plain “icecrete” could be reinforced with tensile elements the same way we do reinforced concrete here. Those elements could be steel rebar imported from Earth, or they could be braided ropes made locally of basalt fiber (or some other rock fiber) derived by melting local rocks. A high Young's modulus for the fiber is nice, but the effective Young’s modulus of the rope will be far less than the individual fiber values.

In any event, the Young's modulus of the reinforcement should exceed that of ice, in order to behave in any way like real reinforced concrete. I'm also thinking that even pre-stressed beams for bridges and buildings could be made using tensioned steel rods, thrust plates, nuts, and washers, the same way we do here. That steel stuff would have to be imported from Earth.

“Icecrete” casting forms: sheet metal recycled from old spacecraft, stage, and tank plating? There would also need to be some sort of stake material and some sort of framing members. All of this could be recycled material from spent rocket equipment. I'm thinking some sort of vacuum wire-feed welding, of recycled aluminum rocket materials, could be used to assemble such cast forms.

Anti-sublimation coating: this would need to be a rather thick water-based (latex?) paint applied to the utterly-dry frozen surface, of sufficient adhesion to balance the vapor pressure at the frozen temperature (6 mbar at 0 degrees C, much less pressure colder). That basic water-based paint idea comes from the water-based paints used to stripe the ice layers at hockey rinks.

Or if that doesn't work, we could try covering the freshly-poured structure with a terry-cloth towel material, and let it freeze directly into the surface of the “icecrete”. Then paint the exposed towel surface with the thick paint. The peel strength ought to be really, really high that way.

We're going to need a thick paint that "dries" in vacuum, and yet doesn't bubble in vacuum, either. That’s a tall order. But it is doable, I think, based on the caulk gun repair kits developed for the old Space Shuttle’s heat shield tiles.

Some have suggested bonding thin Mylar film (or something similar) to the exposed surfaces of the “icecrete”. I’m not at all sure how to effect that bond, but an etched surface on the film seems a good starting point. If a plastic or polymer film or paint is used, it will have to be protected from exposure to ultraviolet (UV) radiation, by shading appropriately.

“Icecrete” ought to be really useful on Mars (or even the moon) for roadways, bridges, large-span open buildings, smaller buildings that have to hold pressure, etc. On the moon, just shade the structure during the day, and it stays very cold. The same is true on Mars, although day temperatures are below freezing there, anyway. For roadway surfaces on either world, a thin sand overburden on the “icecrete” surface would prevent wear.

There might even be way to build-into the structure of an NEO, anchor points made out of “icecrete”, either for anchoring outpost structures there, or else for tow points for asteroid deflection. Either could be a very important capability in the very near future.

Make “icecrete” samples for surface coating experiments in freezers here on Earth. Test various means of applying a barrier coating to prevent sublimation. Test these, at temperatures not to exceed 0 degrees C, in vacuum chambers here on Earth for effectiveness at preventing sublimation.

Attempt mixing and casting small “icecrete” items in sheet metal forms in vacuum conditions here on Earth. This could be done in the space simulation chambers at NASA Houston. This would correspond to similar activities on worlds with significant gravity, such as Mars and the moon.

If successful, a similar activity could be conducted at the space station, to develop and refine casting techniques (probably "pressure-packing" into a closed space) in zero-gee conditions (similar to what would be needed to use “icecrete” on an NEO).

If ever there was some basic research and development work needed to support future space exploration and colonization efforts, this is it! NASA, ESA, JAXA, the Russians, and the Chinese really, really, really need to take a look at this!

My thanks to friends, and to on-line correspondents, who have contributed greatly to this idea.

Update 1-26-13:  see also "Aboveground Mars Houses" dated 1-26-13 for some related construction concepts.  A real concrete-substitute will be required for those uses,  as "icecrete" will be inappropriate at living space temperatures,  and if exposed to sublimation.