Update 10-5-18:  I have used these data,  plus some other things since,  to revisit the radiation exposures from a Mars mission,  and how best to mitigate them.  This is a new article posted 10-5-18,  titled "Space Radiation Risks:  GCR vs SFE".  You should consider this 2012 article to be superseded by that new one one.  That new one does use exactly the same NASA data discussed here.

The topic of radiation dangers and radiation shielding comes up in many on-line conversations, as well as all kinds of technical meetings associated with manned spaceflight outside of low Earth orbit (LEO). Accordingly, I went hunting on the internet and found the NASA document guiding astronaut exposure allowances, which are legally larger than for other radiation workers. Those data are summarized and posted here, as a convenient reference.

These data were copied from http://srag.jsc.nasa.gov/Publications/TM104782/techmemo.htm, titled Spaceflight Radiation Health Program at JSC (no cited reference newer than 1992). Table 1 shows the organ-specific limits, which are depth-dependent, but limited by the organ exposure at 5 cm depth in all cases. One should note that the annual 5 cm limit of 50 REM is twice that of other radiation workers here on Earth. The career limits vary by age and sex as given in their Table 2. But the max is 400 REM organ exposure at 5 cm, no matter what. I used their equations to calculate the ages at which the maximum whole-body organ exposure hits 400 REM, and added that to the presentation of their Table 2. 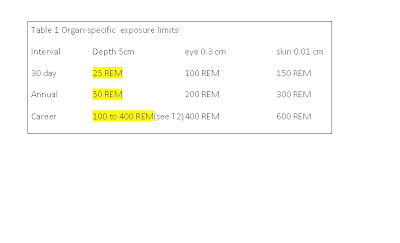 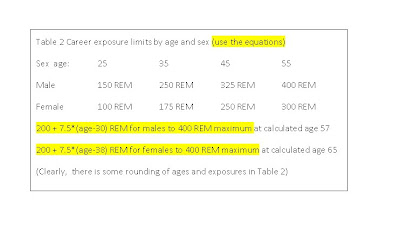 Galactic cosmic ray (GCR) exposures are 24 REM annual (as a slow drizzle) at solar max, 60 REM annual at solar min, pretty much a sine curve with the solar sunspot cycle ("max" = max sunspot activity when the solar wind is the strongest). Shielding for GCR is far less effective as it becomes thicker, due to secondary particle-shower effects. Note that the solar minimum exposure figure of 60 REM annual is not very far at all above the currently-allowed 50 REM annual for astronauts. Most of the solar cycle, GCR exposures are well within allowable limits.

Solar flare particles: From figure 10 reproduced below, the numbers can approach 10^4 REM during a single event, and did between Apollo 16 and Apollo 17. But, exposure is more frequently between 10^0 and 10^1 REM during more typical events, at least as they were recorded during the Apollo program. Spacecraft vs spacesuit had little effect (factor 10 at best). These are short, extremely-intense events, of several hours duration.

Solar particle shielding is described in the NASA document as “20 g/sq.cm of water-equivalent, or more”, see also fig. 9 reproduced below. That would be 20 cm of water shielding thickness, exclusive of any water tank material shielding effects.

GCR shielding data are shown in Fig 6 reproduced below, which I read at the “knee in the curve” for the diminishing returns effect. For LH2: 60 down to to 20 REM at 8 g/sq.cm, that would be 8 cm water-equivalent thickness of LH2, which is about 113 cm LH2 itself at its liquid density, exclusive of any tank wall shielding effects. For H2O: 60 down to 33 REM at 15 g/sq.cm, that would be 15 cm thickness of water, exclusive of tank wall effects. For aluminum: 60 down to 43 REM at 13 g/sq.cm water equivalent, which is about 5 cm of solid aluminum. A very nominal thickness of water essentially cuts solar minimum exposures in half. 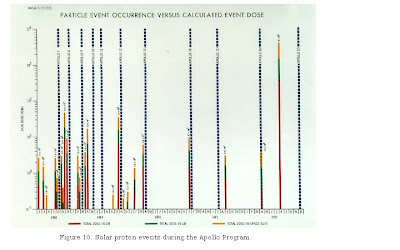 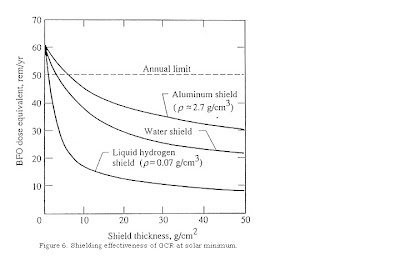 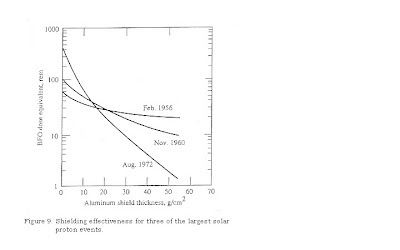 GCR is not much of a problem, as long as repeat trips are not made that exceed career limits. The 50 REM annual limit will be violated slightly at solar minimum conditions.

Solar flare particles can be shielded by creative placement of the water and wastewater tanks, tanks which will be needed anyway. I would suggest using the vehicle flight deck as the designated radiation shelter, so that critical maneuvers are not precluded by the occurrence of a solar storm.

This topic has come up recently as a "show-stopper" for sending men to Mars.  It is not a "show-stopper!  I did some more detailed calculations with a 2.5-year Mars mission round-trip time as baseline.  Here is what I found:


Simple fact-of-technology ----
Unless we invent better propulsion,  men-to-Mars-and-back is roughly a 2.5 year mission.


Assumptions ---
We shall exclude the shielding effects of being on (or near in orbit to) Mars,  which cut GCR exposures to under half,  for that year out of 2.5.  Half-sky “shielding”,  reduces totaled GCR by about 20%.


We shall assume solar flares are shield-able with approximately 20 cm of water/wastewater plus the spacecraft structures,  cutting the exposure at least in half.  (Put the water and wastewater tanks around a radiation shelter area!!)  These add to the total exposure by a small percentage,  basically random in nature,  and fundamentally unpredictable in any formal sense.
The GCR doses (annual,  total,  and monthly) listed above,  uncorrected for planetary half-sky shielding at Mars,  are thus pretty good upper estimates for the total exposure from both sources.


Astronaut rules for exposure limitations (much higher than for civilians) ----------
Copied from http://srag.jsc.nasa.gov/Publications/TM104782/techmemo.htm,  titled Spaceflight Radiation Health Program at JSC (no cited reference newer than 1992)


Compare anticipated exposures to astronaut-rules limitations -----
No more than 25 REM in any given single month:   monthly exposure is 2 to 5 REM…………OK


No more than 50 REM in any given single year:       annual is 24-to-60 REM;  not OK at solar min,  But OK most of the cycle!!!   Consider that a 20% reduction in GCR exposure by planetary half-sky shielding at Mars,  reduces this to exactly the max limit at 50 REM,  to which any solar flare exposures must be added.  The overdose is thus actually most likely very slight,  and only occurs for missions centered at solar min,  with the lowered likelihood of some solar flare exposure!


The only “unacceptable” danger here (under our current astronaut rules) is the annual at-most 60 REM exposure vs the max 50 REM annual limit,  at solar max conditions.  (The more probable value might be closer to 52 REM,  when half-sky shielding effects are taken into account.)  This violation may be a volunteer choice,  because it only exceeds the limit somewhat (or hardly at all),  and then only at solar max.  The “safe” interval (even without half-sky shielding effects) is some 68 or 69% of the solar cycle.
For female astronauts,  there is a minimum age of 31 or 32 to meet worst-case career limitations,  but only if at solar max,  and ignoring half-sky shielding effects.  Male astronauts as young as age 25 meet the career limitation,  even at worst-case solar max conditions,  period.  A more likely exposure estimate actually reduces the female age limit to around age 29.


Crewmembers that fly this mission to Mars should probably not fly in space outside the Van Allen belts again,  because of those career limitations on lifetime exposure.
While serious if the mission has to fly near solar min (max GCR radiation exposure),  this radiation danger simply does not preclude sending men to Mars with current “slowboat” propulsion.  We can do this right now!