For landing upon any world with a significant atmosphere, the drag of an inflatable ballute is of considerable interest. This includes both Earth and Mars, as well as Titan and Venus, and further the giant planets. Drag during the later phases of entry is as much a topic of interest as post-entry supersonic drag. This is because ballutes might possibly reduce the ballistic coefficient of probes or landers during hypersonic entry, if the hypersonic heating problem can be handled.

I found some ballute data as a function of shape at one (and only one) Mach number in reference 1. For only one of these basic shapes, there was also an indication of drag coefficient as a function of supersonic Mach number, although this was at a slightly different cone half-angle for the conical portion.

Figure 1 presents the basic results for three different shapes at one Mach number (4.0) from reference 1. The drag coefficients for these are not very different. The same reference gave drag versus Mach for one of these shapes (Table 1), although not exactly the same shape as any one of the three (a slightly-higher conical half-angle).

As an average curve versus Mach, use the data in Table 1 as a reference value. For your shape, scale that curve up or down according to the drag coefficient data of figure 1.

The effect of cone angle for the cone-sphere shape upon drag coefficient is about 2.5% per degree of conical half-angle, within the data range 38 to 40 degrees. You can probably extrapolate outside that range by +/- 5 degrees with relative impunity, in my humble opinion.

As usual, drag coefficient is referenced to the blockage (or frontal) area, in this case, 0.25*pi*dia^2 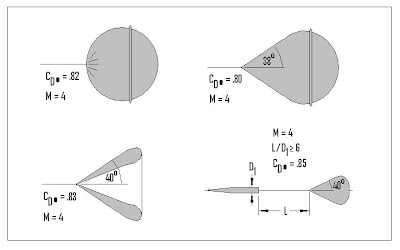 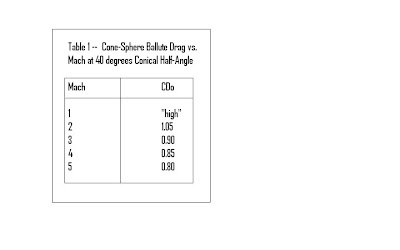