This study estimates closely (on a traceable basis) the velocity requirements for typical minimum-energy (classic) Hohmann transfer from low Earth orbit (LEO) to low Mars orbit (LMO). These are intended as a representative basis for rough-sizing vehicles for those types of missions. The method was pencil-and-paper point calculations, not computer trajectory analysis. LEO altitude was arbitrarily (but quite representatively) selected as 300 Km. LMO was selected as 200 Km. Launch direction was set at 28.5 degrees off the equator, corresponding to Cape Canaveral. All plane changes were included in the Earth departure and arrival velocity requirements.

Values were computed for the “average” orbital locations of Earth and Mars, for a “short trip”, and for a “long trip”. For “average”, the distance of both Earth and Mars from the sun were their average values. For the “short trip”, Earth was at its aphelion at departure, and Mars was at its perihelion at arrival. For the “long trip”, this was reversed. These cases fall plus or minus 19 days of time from an average 259 days for the one way trip. No design margins are built into these velocity requirement estimates. The option for an emergency free-return re-entry to Earth was included in mission velocity requirement totals.

These were based on data given in the CRC Handbook of Chemistry and Physics, 53rd Edition (copyright date 1972), section F. For the “short” mission, data are given below in Figure 1, in Figure 2 for the “average”, and Figure 3 for the “long”, all in the same format. Planet-sun distances are shown in millions of Km (MKm), velocities in Km/s. Planet orbital speeds are shown, as appropriate to the orbital distances used. The perihelion and aphelion Hohmann orbit velocities are also shown, along with the differences between them and the planetary orbital velocities. Figures are not to scale.

At each side of the Hohmann diagram in Figures 1 through 3, there is an orbital diagram for Earth and for Mars. As viewed from coordinates moving with the planet, the velocity difference between the Homann orbit and the planetary orbit speeds is identical to the “velocity-at-infinity” for entry to orbit around the planet. This is the velocity corresponding to the excess or deficit of kinetic energy relative to escape kinetic energy at that orbit altitude. It is not an actual velocity requirement for an engine burn, but it is used in computing that requirement.

Escape From (and Arrival To) Orbit

Figure 4 illustrates the analysis (as viewed from planetary coordinates) of escape or arrival (from either Earth or Mars), to match the required Hohmann perihelion and aphelion velocities as viewed from sun coordinates. Values for planetary surface escape velocity, mass, and average radius are tabulated in the CRC Handbook, section cited. The equations are given in Figure 4 for computing escape and circular orbit velocities at the orbit altitude. These ratio inversely with the square root of radius from planet center. Circular velocity is escape velocity divided by the square root of 2.

Conservation of mechanical energy, with the potential energy referenced to the orbit altitude, requires that the departure kinetic energy at orbit altitude (where potential energy is zero) must equal the kinetic-plus-potential energies “at infinity” (far from the planet). Numerically, the potential energy far from the planet is just the minimum kinetic energy for escape at orbit altitude. Once substituted, all terms contain a (0.5*mass) factor that can be divided off, leaving a collection of simple velocity-squared terms, as shown in Figure 4, already solved for the departure velocity. This same analysis is used in many sources, including “Atmospheric Environments for Entry, Descent, and Landing (EDL)”, by C. G. Justus (NASA Marshall) and R. D. Braun (Georgia Tech), dated June, 2007.

Vdep minus the circular orbit speed is the required velocity change ΔVesc to depart from orbit and enter the Hohmann transfer orbit. The same calculation works for arrival, so the velocity requirements are the same. All of this analysis presumes everything takes place in the plane of the Hohmann transfer orbit, whether at Earth or Mars. There are significant plane change velocity increments involved, which must in some way be accounted, when determing trip requirements.

Plane Changes Made at LEO Only

This analysis presumes two things: (1) the mission launch expense is reduced by using the “standard 28.5 degree inclination launch” out of Canaveral, and (2) LMO will be in the plane of the Hohmann transfer orbit. At LMO this will be somewhere in the neighborhood of 24 to 26 degrees inclination, relative to the Martian equator. This says the vehicle will have to make the complete plane change as it departs, and again for recovery on arrival (back to the least-expensive launch orbit for refurbishment and re-use). The free-return option requires no plane-change or decelerating velocity changes on arrival. I did not calculate any Earth entry interface velocities at 140 km, but they would be only somewhat higher than the departure velocities I computed at 300 km.

That 28.5 degree launch plane is inclined to Earth’s equator, which is itself inclined 23.45 degrees to the ecliptic plane. That ecliptic plane is not the plane of the Hohmann transfer orbit, but it is rather close, as illustrated in Figure 5, at just over 1 degree different, maximum. There are two points around the as-launched orbit where the plane change to ecliptic (or to Hohmann transfer) is minimum. You must burn to depart at one of those.

The velocity change required to make a 7 degree plane change in a 300 km circular Earth orbit is 0.943 Km/s, as shown in Figure 5. However, one should not make this as a separate burn. If done simultaneously with the departure burn, the vector addition reduces the total burn requirement. While this plane change velocity increment is not strictly perpendicular to the vehicle’s path, it is close enough that a simple right triangle is adequate to estimate the departure burn requirement fairly closely. Arrival has the same value.

The velocity increments in Figure 6 are summed up to travel requirements in Figure 7, as a function of the cases “short”, “average”, and “long”. For the free-return option, Earth-arrival velocity increments are zeroed. Sums are shown for the one-way trips to and from Mars, as well as complete mission totals. Of the three cases, the “short” mission is the most demanding, free-return or not. It should be used as the basis for design requirements.

Thus, the one-way trip to Mars requires, at a very minimum, something very close to 6 Km/s delta-vee capability, which is a little smaller than the nominal 8 Km/s that I had previously been using to rough-out designs. However, appropriate design margins must be applied to these estimates to cover unplanned contingency burns and to cover propellant boil-off or evaporation losses. There is also the possibility of meteoroid damage, leading to leaks, until repairs can be made.

Under those circumstances, the 6 Km/s one-way trip looks more like a design-to-7.5 Km/s with liquid hydrogen. That’s not very far at all from what I had been using for the earlier design rough-outs, which were all-liquid hydrogen nuclear-thermal concepts. 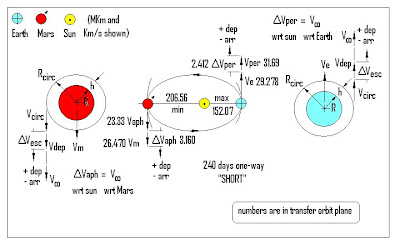 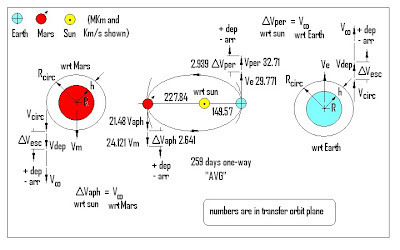 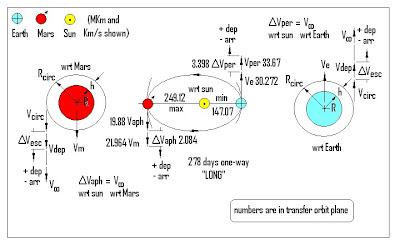 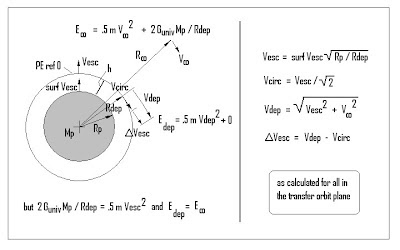 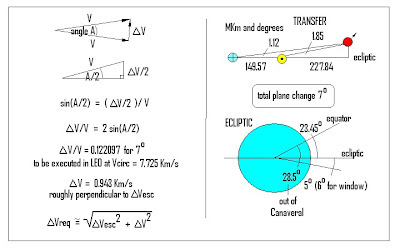 Figure 5 – Plane Changes in LEO at Departure and Arrival 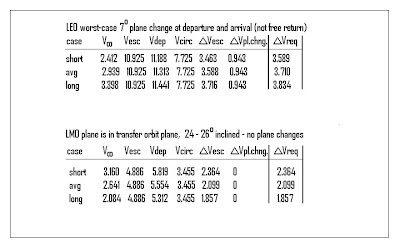 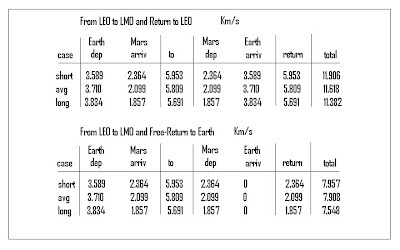