A Closer Look At Nuclear Thermal

This article takes a closer,  more nuanced look at nuclear thermal propulsion for large colonization ships.  It still assumes fairly large dead-head payloads,  but only carried on the outbound voyage!  Propellant is sized to make the outbound and return voyages in one stage (no stage-off or jettisoning of anything along either way,  just unload of the dead-head payload at destination).  The journey baseline is low Earth orbit to low Mars orbit,  and back.

The previous closely-related article was “Colonization Ship Study”,  dated 9-9-19.  It examined the simpler-to-analyze case of carrying the dead-head payload both ways (outbound and return),  so that there was one mass ratio and one delta-vee (dV) to cover the round trip.  That scope was multiple fundamentally-different forms of propulsion:  nuclear explosion drive (or “pulse propulsion”) as it was envisioned in the late 1950’s,  nuclear thermal propulsion (as a version of the solid core NERVA for which engine prototypes were tested),  Hall effect ion propulsion based off of plentiful,  cheap,  and solid-phase-but-sublimable iodine,  LOX-LH2 chemical rockets,  and storable-propellant rockets.

Scope here is only nuclear thermal rocket propulsion,  but with the highly-variable tested or envisioned characteristics of six different design approaches.  It is these six that are compared in terms of the ratio of initial ignition to dead-head payload weight,  using the same maximum-attractive criterion of 5 as in the earlier study.  These six approaches and their relative states of technological readiness are:
(1) as-tested NERVA solid core,
(2) the best-anticipated solid-core NERVA derivatives that never got built or tested,
(3) the particle bed solid core reactor engine (one version of which was “Timberwind”,  which got some exploratory testing revealing unresolved problems,  but never reached the engine prototype stage),
(4) the so-called “nuclear light bulb” gas core concept (some insufficient feasibility tests),
(5) the open-cycle gas core concept restricted to regenerative cooling,  meaning no radiator required (some insufficient feasibility testing),  and
(6) the open-cycle gas core concept with a large,  heavy external waste heat radiator (some insufficient feasibility testing).

To accomplish this investigation,  I added an additional worksheet to the colony ships.xlsx spreadsheet file that I used for the earlier study.  Unlike the previous study,  there are no closed-form ways to get from dead-head payload to a vehicle weight statement.  The calculation uses iterative convergence of the propellant tank inert weight,  and iterative convergence of engine thrust sizing in terms of the resulting vehicle acceleration gee capability.

The propellant tank section contains the common propellant for all nuclear thermal engine approaches:  liquid hydrogen (LH2).  This is a harsh cryogen,  requiring solar heating control,  significant insulation,  and some sort of cryocooler to control evaporation.  This is simply going to be heavier than the lightest-possible single-wall bare tank.  The ratio of propellant mass to loaded tank mass is the fraction ftank.  The single value ftank = 0.95 was used for all six engine types.  Thus:
Loaded tank section mass = propellant mass/ftank
Tank inert mass = loaded tank mass – propellant mass
Propellant mass must be the sum for two burns at differing dead-head payload
One starts with a guess for tank inert,  and iteratively converges it to the result

For the remaining vehicle characteristics,  all the concepts except “GCR+rad” were required to size thrust level such that the vehicle acceleration at the initial ignition mass was at or just above 0.5 gee.  This corresponds to about a 15 minute Earth departure burn,  definitely short enough to qualify as “impulse”,  and not have the orbital dV be factored-up for gravity loss to be mass ratio-effective.

With the data I used,  the GCR+rad system could not reach half a gee,  but converged fairly well at 0.33 gee.  This is less than a 30 minute burn,  still short enough to consider as “impulsive” for Earth departure.

Max gee at final burnout weight upon Earth return should be under about 5,  but this proved not to be a problem.

The orbital dV’s that are required are those for getting from low orbit onto a min-energy Hohmann transfer ellipse.  The values used are worst-cases that do not go together;  the difference is a nice little “kitty” to cover midcourse corrections.  Earth departure = Earth arrival = 3.84 km/s.  Mars arrival = Mars departure = 1.83 km/s.  These sum to 5.67 km/s outbound in a heavier ship carrying payload,  and 5.67 km/s return in a lighter ship with no payload and already having burned off some propellant on the outbound voyage.

You start the calculation with the return voyage by summing up the inerts (payload section inert + tank inert + engine inert),  plus zero dead-head payload,  as the burnout mass at Earth arrival.  This starts with a best guess for inert tank mass,  as well as for installed engine thrust level.  Apply the appropriate mass ratio to get Mars departure ignition mass.  The difference in ignition vs burnout mass is the propellant expended for the two burns of the return voyage.

Max gees at Earth arrival burnout did not prove to be a problem,  but should fall under 5 gees for the most tolerable results.  Be sure you check for that outcome.

The last calculation sets up weight statements and estimated dV performance for the six propulsion types,  using the data already calculated.  The initial part of the weight statement is the vehicle buildup from payload and inert items to Earth departure ignition mass.  Subtracting the total outbound propellant gives the Mars arrival burnout mass.  Their ratio produces an outbound summed dV for both burns,  to be calculated for each type (for comparison to the initial summed requirement).

That Mars arrival burnout mass,  less the dead-head payload,  is the Mars departure ignition mass.  Subtracting the return voyage propellant produces the Earth arrival burnout mass.  Their ratio produces a return summed dV for the two burns,  done for for each propulsion type (for comparison to that summed requirement).

The deviations of these weight statement dV’s from the required values reflect just how closely you converged your tank inert weights.  These should be only trivially off (by under 0.001 km/s = 1 m/s).  If you see bigger errors,  you didn’t converge your tank inert masses closely enough.  The effect of being “off” on min gee (as set by installed thrust level) is small,  when compared to the effect of being “off” on guessed tank inert mass.

This limit (in either form) is inherently a very fuzzy judgement call.  But,  if dead-head payload mass is too small compared to Earth departure ignition mass,  the resulting design will be inherently very expensive to build and to operate,  just like with ocean-going transport when the cargo mass is small compared to the tonnage of the ship.

What I got for this study is given in Figures 1 and 2,  a two-part image of the completed spreadsheet worksheet page.  Of the six propulsion types,  four look reasonably-to-very attractive.  These are the derivative of NERVA,  some form of PBR,  and the two gas core concepts that do not require a huge waste heat radiator.  The as-tested NERVA falls short because its engine thrust/weight is too low and the resulting large engine inerts drive the vehicle inerts,  constrained by the large thrust level to achieve min acceleration gees.  The gas core with radiator falls short because of the gigantic,  heavy radiator.

Near-term,  the higher Isp and engine thrust/weight of the derivative NERVA could be realized in a few short years,  to an engine prototype ready for flight test.  The PBR concept would take a few more years than that,  since no prototype engines were ever ground tested,  and some fundamental problems identified in testing of “Timberwind” components remain unresolved.  The gas core concepts would require several-to-many years to reach a flight-testable prototype,  since only very sparse lab-type feasibility demonstrations were ever done;  plus,  there is no guarantee of eventual success,  either.

My own recommendation would be to base an initial design around the derivative NERVA as lowest-risk option of acceptable benefit,  and plan on replacing it later with one of the non-radiator gas core designs,  should that development prove successful.

Figure 3 sketches a ship design concept based on the derivative of NERVA,  figured at 100 metric tons of dead-head payload delivered to Mars.  Volume of LH2 and a guess for tank L/D set the tank dimensions.  Everything else scales one way or another from that,  as a first approximation.  Everything about the weight statement and thrust level sizing is proportional to dead-head payload size.  Dimensions would scale as the cube root of mass,  provided that L/D ratios are preserved.

This vehicle rough-out delivers the same design dead-head payload to Mars as the proposed Spacex “Starship” design.  The differences are several:  this vehicle never lands on Mars (delivery to the surface is by unspecified other means),  this vehicle must make a full Mars arrival burn into low orbit (“Starship” only makes a final touchdown burn after an aerobraking direct entry),  and this vehicle returns all the way to low Earth orbit for reuse,  unrefueled.  It never needs to survive any sort of atmospheric entry.

This design makes the round trip single-stage unrefueled.  The Spacex “Starship” is entirely one-way only,  unless and until it can be refueled on the surface of Mars from local resources.

There is enough payload section volume to support a crew of up to 15,  at about 300 cubic meters per person,  in addition to the volume occupied by the dead-head payload,  at a payload specific gravity averaging only 0.3. 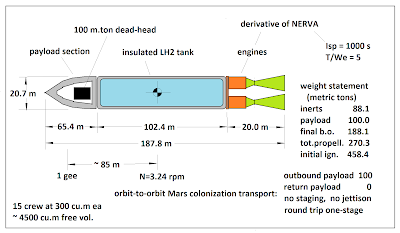 This result says a Mars colonization ship able to carry 100 metric tons of dead-head payload one-way to Mars,  and return to Earth with no payload,  all one-stage,  is not that large an item.  It is not large enough to spin for artificial gravity like a rifle bullet,  but it is large enough to spin end-over-end (like a baton) for artificial gravity.  At about 3.24 rpm,  there is about one full gee available in the payload section.  That spin rate is tolerable to untrained,  unacclimatized people,  for long-term exposure.

The insulation and meteor shielding is about a meter thick on the payload section,  meaning it can double as radiation protection.  If those layers of fabric average 0.20 effective bulk specific gravity,  that is some 20 g/sq.cm shielding mass,  adequate for solar flare events,  and offering some reduction of galactic cosmic radiation.  The insulation and tank shell thickness of the propellant tank section was assumed to be 0.1 m.  Engine section length was just a guess.

Key to this design as-sized is carriage of dead-head payload to Mars,  but not from Mars.  The return dead-head payload must be zero!  If not,  the propellant tank section must be significantly larger,  to the detriment of the payload fraction criteria.  Any crew and their life support must come out of that dead-head payload allowance (meaning near-zero crew on the return voyage).

The restriction of zero dead-head payload on the return voyage is not as constraining as it first sounds,  when one considers the goal is building a colony with these payloads.  During that process there is little-or-nothing to ship home to Earth,  except information,  which is better sent electronically.  Later,  when an operating economy results in two-way trade,  one will need commerce ships,  not colonization ships.  But,  by the time that need arises,  significantly-better propulsion technology should have become available.

Brief Result Summary:  The best near-term option of the six nuclear thermal approaches,  for a Mars colonization ship design,  is the derivative-NERVA nuclear thermal propulsion approach (Isp ~ 1000 s and engine T/W ~ 5).  For 100 metric tons dead head payload,  the initial ignition mass is about 500 metric tons.  That means for 1000 metric tons dead-head payload,  the sized ship will initially mass about 5000 metric tons.  For 2000 tons payload,  the ship will be around 10,000 tons,  etc.  This is restricted to orbit-to-orbit operation,  and to no dead-head payload on the return voyage.   Even the small 100-ton payload size is large enough to spin end-over-end for artificial gravity at near 1 gee and an easily-tolerated spin rate.  The payload section insulated design (if a meter of fabric layers) also inherently provides a fair amount of radiation protection.