Spacex "Starship" as a Ferry for Colonization Ships

If one looks at a large orbit-to-orbit transport ship to be the "freighter" for colonization efforts at Mars,  then there must be some way to ferry-up cargo into Earth orbit to load this ship.  And,  there must be some way to ferry-down cargo from this ship in Mars orbit,  to the surface.  This is the analog to the way ocean-going ships were loaded and unloaded,  for centuries here on Earth.

Consider:  the Spacex "Starship" is first and foremost a large-payload transport from Earth's surface to low Earth orbit.  It uses a recoverable booster to deliver payload to orbit in 100+ ton lots,  without any refueling.  One flight,  one 100+ ton payload delivery.  I am not aware of how much it can transport down from Earth orbit,  but for colonization,  that is not so relevant (later on with interplanetary trade it is).

If one believes the published numbers for "Starship",  this is an impressive ferry vehicle.  It could easily transport a payload to a colonization vessel in Earth orbit in those 100+ metric ton lots.  So I think we have that end covered.  1 flight for a 100 ton colony ship payload,  10 flights for a 1000 ton colony ship payload,  etc.  Cost per ton delivered will be whatever it turns out to be for actual "Starship" operation.  We won't know what that really is until it has been tested and begins regular flights.

Now,  what about at Mars?  What might "Starship" do for us,  to unload that orbiting colony ship and bring its payload to the surface?  I took a look at that with data for low Mars orbit (3.55 km/s),  a small landing burn allowance (Mach 1-ish 0.33 km/s),  factors on the delta-vees,  and a generous rendezvous allowance on-orbit at Mars (1 km/s).  The factors were 1.02 for gravity and drag to reach orbit,  1.5 on the min landing allowance,  and 1.0 on the rendezvous allowance.

For the ship,  I used the published figure for ship inert mass 85 metric tons (about which I have serious doubts until I see it actually fly at that inert weight),  and a "typical" but conservative figure for vacuum Raptor engine performance of 350 sec Isp.  It holds up to 1100 metric tons of propellant that must be produced on Mars from local materials,  and in quantities and rates to support the flight rates. All that is assumed for this investigation.

I did the mass-ratio-effective dV thing to estimate performance vs payload and propellant load,  done as the same large payload masses transferred both ways (both up,  and down).  Those results were surprisingly good:

This result is driven by the low inert mass reported so far for the "Starship" design.  If you believe that really will be achieved,  then it looks like a "Starship" stationed on Mars,  and locally refuelled there,  can serve very well as a reusable ferry for colonization ships sent to low Mars orbit.  That covers the Mars ferry needs for an orbit-to-orbit colonization ship.

Now,  the vast bulk of Mars's surface resembles fine, loose sand.  Here on Earth,  safe bearing load pressures for fine,  loose sand (based on many decades civil engineering experience) is 0.1 to 0.2 MPa.  Period.  You must use the lower figure to design things in the absence of real soil test data from your actual site.  So you must use the 0.1 MPa figure.

I looked at various ignition masses of "Starship" that are more-or-less appropriate to the Mars orbital ferry role,  calculated their weights at Mars 0.384 gee,  and divided by the soil bearing strength figure,  to find the total tail fin landing pad areas that are required to support rough-field takeoff operations.  They fall in the 45-55 square meter range.  That's just the nature of rough-field operations on Mars,  and it will have to be dealt with in the "Starship" design.  They currently have a single handful of square meters,  at best.  Spacex will have to address this issue,  sooner or later.

The final thing to worry about is the "Starship" heat shield.  I presume there will be PICA-X ablative on the windward surfaces,  nosetip,  and leading edges.  Entry from Mars orbit is about half the speed from Earth orbit,  so the heat shield will likely fly 3 or 4 times (maybe more!) before being used-up. There will have to some way to refurbish this on Mars (in the cold and the near-vacuum) using materials brought from Earth.  Spacex will have to eventually address this issue as well,  if they ever use the "Starship" for this purpose.

That still begs the question of landing stability,  since the vehicle is tall and narrow,  and the gear is tripod,  not quadruped.  Landing fields will have to be very level,  very flat,  and very free of big boulders.  Period!  Spacex will have to face up to that issue eventually,  regardless of what purpose their "Starship" gets used for,  on Mars.

That's the problem with me being a real engineer.  I tend to worry about the damndest real-world things.  How very inconvenient!

All that being said,  it looks to me like "Starship" would make a very good ferry to load and unload orbit-to-orbit transports,  at both ends of the Earth-Mars journey.  That means we are NOT barking up the wrong tree in looking at design approaches for orbit-to-orbit colonization transports.

Figure 1 is an image of the spreadsheet worksheet I used to figure these numbers.  Inputs are highlighted yellow. 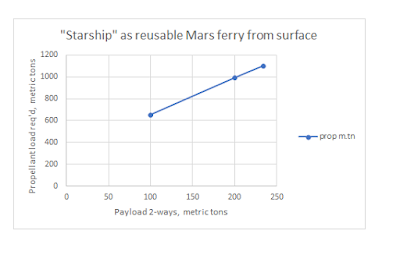 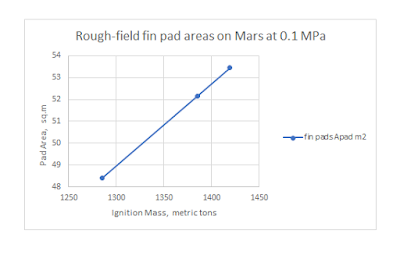