This article picks up where Ref. 1 left off,  looking at direct lunar landings using a Starship refueled (fully) in Earth orbit.  That might require a lot of tanker flights,  something not investigated here or in Ref. 1.  The methods and assumptions mostly conform to those given in Ref. 2.  A brief list of selected orbital data is given in Fig. 1,  which includes the results initially determined for Ref.1.  All figures are at the end of this article.

I chose to analyze a min-energy Hohmann transfer to the vicinity of the moon,  instead of the Apollo figure-eight orbit.  The Apollo trajectory,  while a slightly-shorter transfer time,  is more suited to entering low retrograde orbit about the moon.  The Hohmann trajectory is closer to the real 3-body result for a direct landing on the lunar near side.  The trajectory and related data are given in Fig. 2.  The variations in lunar distance from Earth are included,  labeled as “close”,  “average”,  and “far”.

The actual mission uses a slightly-different return trajectory from the moon.  It is a min-energy Hohmann transfer ellipse,  but it is one that grazes the Earth’s surface at perigee.  That ensures a direct atmospheric entry and landing upon return to Earth.  Entry interface speeds are very near 11 km/s.  The rough locations for midcourse and terminal course corrections are shown with red stars in Fig. 3.

Fig. 5 shows the basic approaches to and from the moon,  viewed with respect to the moon,  plus where the gravitational loss factor comes from.  There is no drag loss factor at the airless moon.  This stuff gets used figuring the factored (mass ratio-effective) delta-vees to land,  and to take off.

The landing and takeoff details have to include engine selections,  because for the touchdown and liftoff immediately adjacent to the moon’s surface,  the thrust vector control (TVC) capability afforded by the sea level Raptor engines is simply required!  The bulk of these burns can be accomplished with the vacuum Raptor engines,  farther from the surface,  at higher specific impulse.  This means there must be a shift from vacuum to sea level engines near the end of the landing burn,  and a similar shift from sea level to vacuum engines after the start of the takeoff burn. See Fig. 6. I guessed “the last 0.5 km/s”.

Fig. 7 contains a multitude of useful data regarding burn delta-vees.  The departure burn from Earth orbit onto the transfer trajectory is not only figured for “close”,  “average”,  and “far” lunar distances,  but also for multiple choices of elliptical orbits about the Earth.  The landing burns and the takeoff burns at the moon depend only upon lunar distances, and not upon choice of Earth elliptic orbit.  Delta-vees are totaled in this figure as a measure of how demanding the mission is,  although with different engine specific impulses,  these are not values one can use to design vehicle mass fractions.

The “right” way to estimate performance is with a burn record spreadsheet as illustrated by the image in Fig. 8.  This one has inputs for the vehicle weight statement that include separate entries for outbound and return payload.  The relevant engine performances for the two engine types are included as inputs (yellow-highlighted),  complete with max and min power setting data.  A linear model is computed between max and min settings,  for both thrust and specific impulse.

There are 4 burns listed for the outbound journey,  and 4 more for the return journey.  There is an Earth orbit departure burn,  starting from max propellant load,  a burn representing the 2 course corrections,  the vacuum-engine portion of the landing burn,  and the sea level-engine portion of the landing burn.  For the return,  there is takeoff using the sea level engines,  then departure using the vacuum engines,  a burn representing the 2 course corrections,  and the terminal landing burn after atmospheric aerobraking entry,  with the sea level engines.  There are inputs for each of these 8 burns,  for the user’s selection of how many engines and what throttle setting to use (highlighted yellow).

Significant information or outputs are highlighted blue or green.  Lots of data are simply built-in,  including the worst-case delta-vees related to lunar distance effects.  That means the payloads indicated can be carried,  or perhaps very slightly more,  but never less.   The departure delta-vee associated with the elliptical orbit about the Earth is the main variable here,  besides outbound and return payload.  That departure input is also highlighted yellow,  located top right of worksheet.  Adjacent to it are records of the various inputs appropriate to the various elliptic orbits,  plus a results record for the payloads obtained with each of these departures.

The way this worksheet functions is a user iteration of outbound and return payloads (and the number of engines and their thrust settings),  until the propellant remaining at end of mission is a nonzero fraction of a ton.  Thrust setting affect specific impulse,  but it and the number of engines affects thrust/weight far more.  These thrust/weights need to meet the green-highlighted requirements shown.

I took the accumulated payload results (in the form of zero return payload) vs elliptic orbit apogee altitude,  and combined them with the payloads deliverable to those same orbits from Ref. 1,  and cross-plotted them below the vehicle performance analysis in this worksheet.  All of that is shown in the figure.   The curves cross at about 7000 km apogee altitude,  at about 75 tons delivered (with zero return payload).  The 10,000 km apogee altitude is associated with 59 tons delivered to orbit.  Using those 59 tons as the outbound payload to the moon from that 300x10,000 km orbit,  I found there was just enough propellant to bring 32 tons of payload back from the moon,  and then to land with it.

The 59 ton outbound with 32 ton return from 10,000 km apogee is depicted in Figure 9.  The 75 ton outbound with 0 ton return from about 7000 km apogee is depicted in Fig. 10.  The latter is more approximate,  being just read from the cross plot graph,  but it is “in the ballpark”.  Thus it would seem to be feasible to deliver significant tonnages to the moon with this Starship/Superheavy system,  but not the “100+ tons” advertised on the Spacex website for low Earth orbit and Mars.   The lunar mission is more demanding than the Mars mission,  because there is no refueling on the moon for the return.

Regardless,  the 7000-to-10,000 km apogee altitude is well within the Van Allen radiation belts!  The cargo delivered from orbits like this must be radiation-hardened.  Any crew (or passengers) will certainly require an effective radiation shelter somewhere aboard the vehicle.

I did not investigate the tanker problem:  on-orbit refueling of Starship to the 1200 metric ton max propellant load!  Be aware that many tanker flights will be required,  especially since far smaller payloads (or transferable propellant) can be delivered to these high-apogee elliptic orbits.

References (all located on this site) 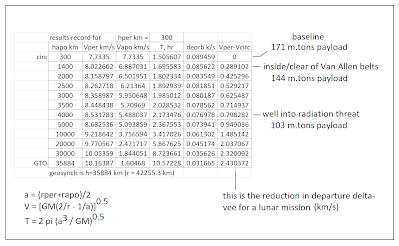 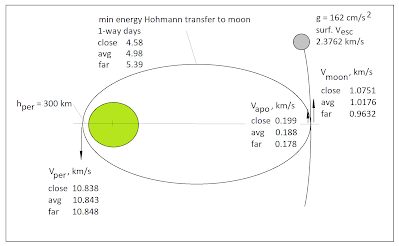 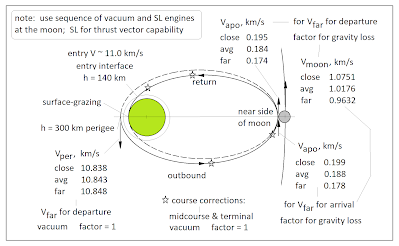 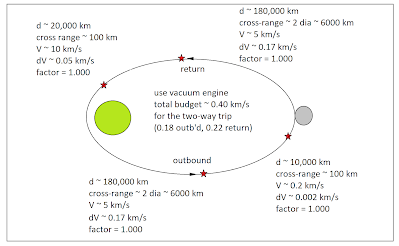 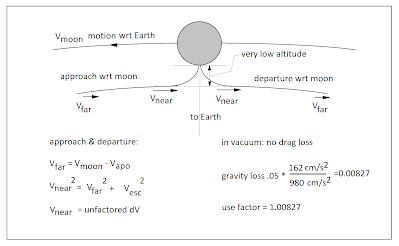 Figure 5 – Direct Landing Approaches and Departures at the Moon 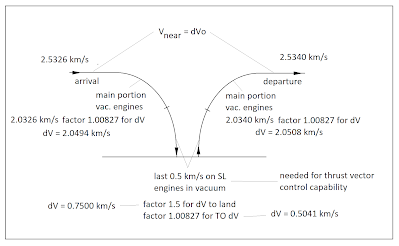 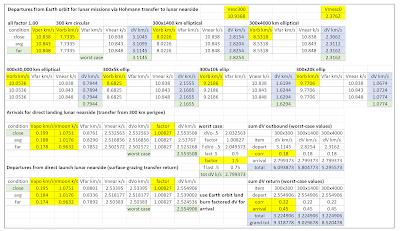 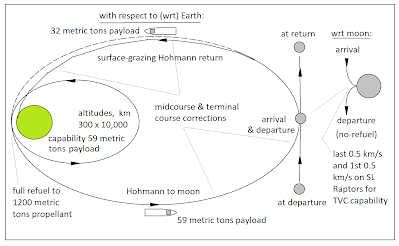 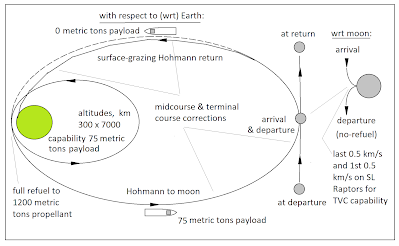