Update 3-26-21:  this second tanker study looked at refilling the lunar mission Starship in low circular orbit,  where tanker Starship capacities are high,  then topping it off after moving it to the departure orbit,  with more tankers sent directly to that orbit.  That reduced the number of required tankers,  but not by enough to be truly practical.  The strategy explored in the third study (also posted here) turned out to be the most effective one.

In Ref. 1,  I defined two elliptical orbits from which a Spacex Starship could be sent fully-fueled on a lunar nearside landing mission,  be unrefueled on the moon,  and return to a free entry landing trajectory at Earth.  Payloads sendable to the moon this way are far smaller than payloads deliverable to low circular Earth orbit,  because payload capacity to the higher-energy orbit is reduced,  as well as the inherently-smaller payload capacity for the lunar flight.

In Ref. 2,  I determined the deliverable propellant quantities from two potential Spacex tanker configurations:  a dedicated tanker design with extra tankage volume in the forward spaces,  and an ordinary Starship flown fully fueled,  but at zero payload,  so that it arrives with significant unused propellant.  The scope of that study looked at the 300 x 300 km altitude low circular Earth orbit,  and the two possible elliptical lunar mission departure orbits that “sort-of” bound the problem.

Deliverable tanker “payload” with either configuration was considerable in low circular orbit,  but a lot less when sent directly to either of the two elliptical orbits.  This is because the higher energy orbits require a whole lot more propellant just to be reached.  In all these scenarios,  the dedicated tanker design carries somewhat more deliverable propellant than the ordinary Starship flown at zero payload.

This basic information is summarized in Figure 1 below.  All figures are located at the end of this article.  The two elliptical lunar departure orbits and associated lunar payloads are in the upper part of the figure.  The tanker delivery capacities are shown for both tanker configurations,  at each of the three orbit locations,  in the lower part of the figure.  In each case,  the Starship/Superheavy tanker vehicle is flown directly to the target orbit location,  as is the cargo/passenger Starship/Superheavy vehicle.

The small tanker propellant delivery capacities to elliptic orbit versus the large capacities to low circular orbit suggested a two-step refueling operation for the lunar-bound Starship:  a full-capacity refill in low circular orbit,  followed by moving it to the elliptic orbit,  with another refill there.  This would apply to either lunar mission scenario. It could be done with either tanker configuration.  Hopefully,  fewer tanker flights would be required than by direct one-step refueling in the elliptic departure orbit.

Then I calculated the number of tanker flights required to carry out these operations (first the low circular refill,  then second the elliptic refuel after moving there).  In each operation,  the requisite tankers are flown directly to the orbit where the refill will take place. The limiting number of tanker flights is the refill requirement divided by tanker delivery capacity,  but the only such number that makes any sense is an integer!  You always hold back the tanker landing reserve from deliverable propellant.

If there are decimals,  you must round up to the next-larger integer!  That is because you cannot carry more deliverable propellant than the max capacities these calculations have identified,  but you can always carry a little less than max capacity.

The refill requirements in low circular orbit for the lunar-bound Starship are just about 1050 tons of propellant,  depending upon which mission and payload we are talking about.  The tanker capacities to low circular orbit are right at 200 tons per vehicle,  give or take,  depending upon whether the tanker is the dedicated design or the ordinary Starship flown as a tanker.  Those numbers and the rounded-up integer numbers of flights are given in Figure 5.  Note that the delivered tanker loads are just not very far from the max capacities of the tankers,  as also given in the figure.   We are looking at 5 dedicated tankers,  or 6 ordinary tankers,  to accomplish this,  for either lunar departure scenario.

The second refueling operation is illustrated in Figure 6.  The refill requirements are far smaller,  but then so are the max tanker capacities!  Again,  you round up the decimals to the next larger integer number of tankers.  Those results show 3 tankers (of either type) are needed for the 300 x 7000 km orbit that supports 75 ton lunar landings,  with 0 tons return payload.  The more demanding 300 x 10,000 km orbit requires 5 tankers of either type,  but that scenario supports a 32 ton return payload,  with 59 tons landed on the moon.  It is the higher-energy orbit.

A summary comparison of these results versus the direct staging in elliptical orbit,  and versus operations only to 300 x 300 km circular  are given in Figure 7.  That figure this summarizes the results of the first tanker study and this second one.

The max payload deliverable to low circular orbit is quite a bit more at 171 metric tons.  That is why 7 ordinary or 6 dedicated tankers are needed to fully refill the Starship there.  That’s a Ref. 2 result.

Readers need to be aware that these calculations I have made are not any sort of simulations run with any sort of computer programs.  These are the kind of calculations I would make,  if I sat down at the kitchen table with pencil,  paper,  and a pocket calculator (or even a slide rule).  These have been semi-automated with spreadsheet software,  but are essentially the same very simple calculations made with simple models,  plus the engineering art of selecting the right “jigger factors” to get realistic results.

For those readers too young to know what a slide rule is,  see Ref. 3.

The improvement achieved with two-step refilling is attractive,  and the disparity between tanker capacities in low circular versus feasible lunar departure orbits is large.  That suggests refilling not only the lunar mission Starship in low Earth orbit,  but also 1 or maybe 2 tankers.  The mission Starship plus the 1 or 2 refilled tankers would then move to the elliptical departure orbit,  where those tankers would top-off the mission Starship.  As time and opportunity permits,  I will look at this method of employing these assets,  to see if the total number of supporting tanker flights can be reduced further.

References (all are located on this site) 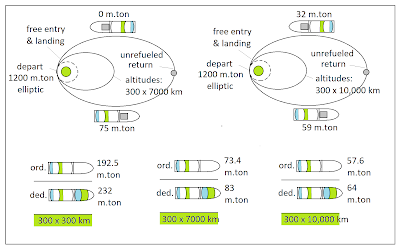 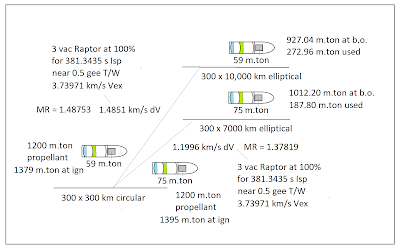 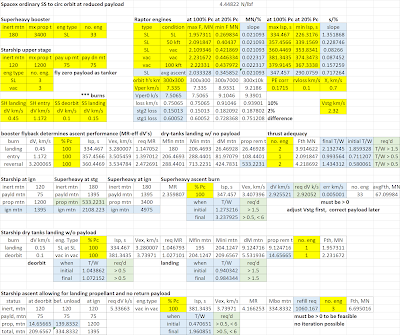 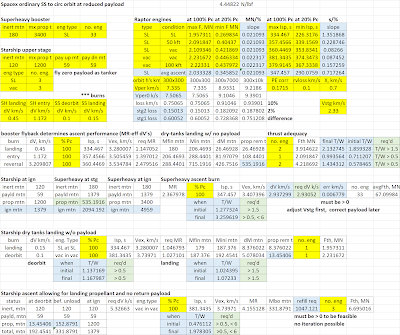 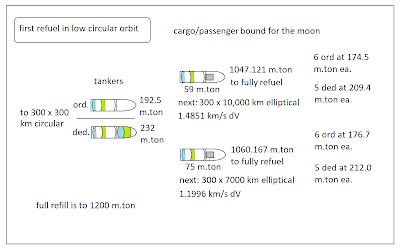 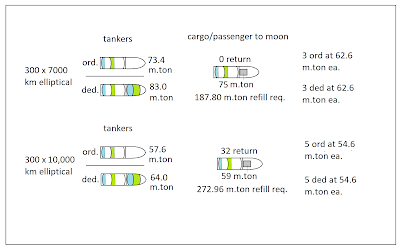 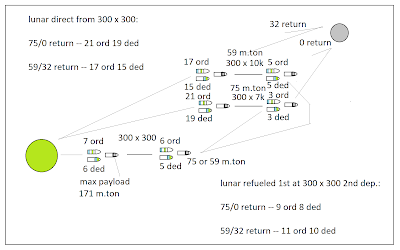