Update 3-26-21:  this third tanker study identified the best approach to refilling the lunar mission Starship on-orbit.  This approach maximizes tanker operations in low circular orbit,  and minimizes them to one refilled fly-along tanker sent to the elliptical departure orbit.

This article presents work that follows up on the lunar mission results already posted in Ref. 1 and Ref. 2.  The first was a Spacex tanker study aimed at refilling a lunar landing mission Starship directly in the elliptical departure orbit required to make a lunar landing mission feasible.  The second was a two-stage refilling operation,  with a full refill of the mission Starship in low circular orbit,  and a more modest top-off in the elliptic departure orbit,  from tankers sent directly there. Those orbits were defined in Ref. 3.  The reverse-engineering of vehicle performance characteristics to support this was presented in Ref. 4.

For clarity,  the elliptic departure orbits being considered are 300 x 7000 km altitude,  and 300 x 10,000 km altitude.  The low circular orbit is 300 x 300 km altitude.  Lunar missions flown from the lower-apogee orbit can take a max 75 metric tons payload to the lunar surface,  with 0 tons payload returned to Earth.  From the higher orbit,  59 tons can be landed on the moon,  with 32 tons returned.  Bear in mind that these elliptic departure orbits penetrate deeply into the Van Allen radiation belts,  whose “base” is nominally about 1400 km altitude.  That definitely means that cargo must be radiation-hard,  and any crew/passengers must have a good radiation shelter,   in order to perform these lunar missions.

As indicated in Ref. 1,  there are two possible tanker configurations:  (1) a dedicated tanker design with extra tankage volume in the forward spaces,  and (2) an ordinary cargo or crew Starship flow at zero payload,  so that there is unused propellant aboard upon arrival.  These are based upon comments made by Mr. Musk in his public pronouncements,  and presume the same inert vehicle mass of 120 metric tons as I used,  in reverse-engineering Starship/Superheavy performance in Ref. 4.

Flown to the low circular orbit,  and withholding only a dry-tanks landing allowance of 9.02 tons propellant,  the deliverable-propellant capacities of these tanker options currently calculate as 232.00 metric tons for the dedicated design,  and 192.51 tons for the ordinary Starship flown at zero payload.   Those capacities are dramatically lower still,  when flown to higher-energy orbits!  They are max capacities:  you can always fly with less,  but never more!

The refill requirements from elliptic departure for the mission Starship were computed in Ref. 1,  and are repeated here in Figure 1 below.  That figure shows both the direct refill in elliptic,  and the two-step refill and top-off requirements.  It is quite easy to see the dramatic difference!  These refill requirements in elliptic orbit are substantially larger than the capacities of the tanker configurations,  when flown directly to the elliptic orbits.  That is exactly why the second study in Ref. 2 got the results that it did,  despite doing the initial full refill of the mission Starship in the low circular orbit.

I did simple hand calculations with a calculator to determine the departure mass from low circular orbit for the one tanker that accompanies the mission Starship to its elliptic departure orbit.  Those are based on the top-off requirements of the mission vehicle in the elliptic departure orbit.  Those top-off requirements are shown on the right-hand side of Figure 2,  as well as the left side of Figure 1.  Note that due allowance was made for the landing reserve propellant,  while still carrying full deliverable payload.

A Starship fully refilled in low circular orbit arrives in its lunar departure elliptical orbit only a little less than full,  despite it being early in the burn when you use lots of propellant for little effect.  That is because the mass ratio MR required for the orbit-changing burn is actually rather modest.  This was figured for 3 vacuum Raptor engines at full thrust in vacuum.  That’s enough to be an impulsive burn,  so the orbital mechanics delta-vee is the mass ratio-effective delta-vee for the maneuver (factor = 1.000).  Mass ratio data are given in the middle of Figure 2,  along with the propellant loads upon arrival that allow topping off the mission Starship,  while still retaining a landing reserve.

The resulting procedure to run the lunar landing mission is simple.  Note that “ord” refers to an ordinary Starship used as a tanker by flying at zero payload,  and “ded” refers to a dedicated tanker design with extra tankage capacity in the forward spaces,  beyond the regular 1200 metric ton capacity.

Step 2. – Refill the mission Starship from the first 5 ded (or 6 ord) tankers,  leaving the 5th (or 6th) with a partial load still aboard,  while always withholding landing reserve in all tankers.

Step 3. – Put that partial load in the next-to-last tanker into the last tanker,  to fill it with enough propellant to reach the elliptical departure orbit,  plus just enough to cover the mission Starship refill,  while still maintaining the tanker landing reserve.

Step 4. – The mission Starship plus that one partly-refilled tanker,  go to the departure elliptical orbit,  while the other (empty) tankers return to Earth using their landing reserves.  Their entry speed will be about 8 km/s.

Step 5. – The last tanker tops-off the mission Starship,  there in the elliptical departure orbit,  then returns to Earth using its landing reserve.  Entry speed will be about 9 km/s.

Step 6. – The mission Starship,  being now fully refilled in its elliptic departure orbit,  can then carry out its lunar nearside landing mission,  including return to a free entry at Earth,  and landing with its landing reserve.  Its entry speed will be about 11 km/s.

The tanker and refill quantity data are summarized in Table 1 below,  just ahead of the figures.  All are at the end of this article.  How these lunar landing missions compare to others is shown in Figure 3.

The reader should bear in mind that these results are not from computer trajectory or orbital simulations run on a computer!  These are the results of simple hand calculations made from simple equations,  sometimes semi-automated with a spreadsheet,  and sometimes not.  For such,  the use of empirical “jigger factors” is necessary to get realistic results.  Those derive from experience in the field.

The reader should also bear in mind that the two-way mission to a lunar landing requires significantly more delta-vee than the one-way flight to Mars.  There is potentially propellant manufacture capability on Mars,  but not the moon.  This has an exponential effect on vehicle mass ratio.

The assumptions in common here with all the references cited are:

#2.  Vehicle inert mass presumed to be 120 metric tons,  regardless of type

#3. Engine performance factors are per Ref. 5,  converted to metric

#4. Effects on performance due to throttle setting are presumed linear,  from min to max

#6. Delta vee factors are experiential judgements that account for gravity losses,  drag losses,  and any hover or divert effects during landings

#7. For purposes of eastward launch,  the surface circular velocity is used as the kinematic velocity to attain,  in order to include potential energy effects into the rocket equation calculation

#8. For purposes of eastward launch,  the surface circular velocity (or higher) gets factored by 1.10 to account for gravity and drag losses at 5% each

#9. If launch were polar,  the eastward velocity due to Earth’s rotation at the launch latitude would be added to the surface circular (or higher) velocity (add two rotation velocities if westward launch)

References (all are located on this site)

The easiest way to locate references on this site is to use the navigation tool on left-of-page.  You will need the year and month it was posted,  and the title.  Click first on the year,  then on the month.  If need be,  click on the title.  It would be wise to scrawl all this reference date and title information onto a piece of scrap paper,  before starting that research. 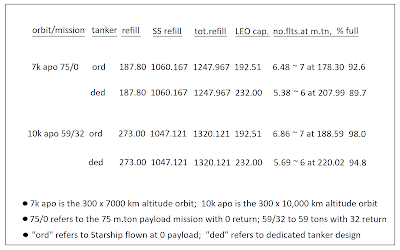 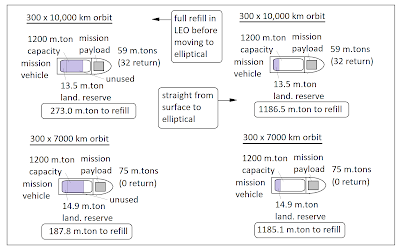 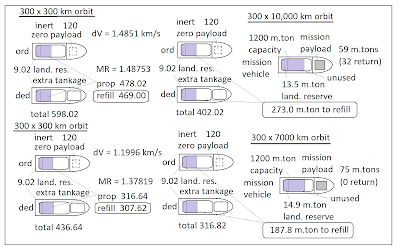 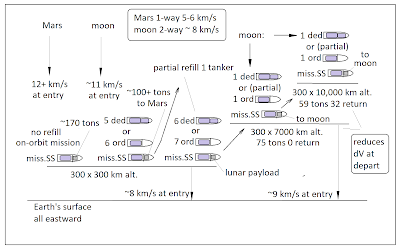