This and similar earlier articles were done to help define what the Spacex "Starship/Superheavy" design might be capable of achieving, once all its evident problems are solved.  While prototypes have begun to fly,  the design is obviously still quite immature.  Landing on a reinforced concrete pad is still a severe problem.  Landing on dirt is obviously completely out of the question.  Slosh and ullage in the propellant tanks still seems to be a problem,  as are leaks and unwanted engine bay fires.  Spacex has a long way to go before this design will be ready.   Yet its potential looms quite large.  So the massive effort that is needed would seem to be worth it.

I recently updated my reverse-engineering estimates for what a Spacex “Starship/Superheavy” vehicle can accomplish flying to circular low Earth orbit (LEO) from eastward launch.  These are based on the best available information about the vehicle from the Spacex website,  the Spacex user’s manual for flying on this vehicle,  what some observers have published for inboard profile details,  and what Wikipedia shows for details like inert masses.

There is still a big difference between the Starship test flight prototypes Spacex is flying,  and its proposed orbital transport design.  This shows up in the inboard profile,  and in the landing legs.  The prototypes are presumed to be heavier in construction,  since data is still being obtained.  The hull forward of the propellant tanks is mostly empty,  whereas in the proposed transport vehicles,  those spaces are rigged for all-cargo,  passengers plus some cargo,  or extra tanks for a tanker version.

Figure 2 gives similar pertinent data for the Spacex Superheavy booster design.  It depends upon the source as to how many sea level Raptor engines power this stage.  Currently Spacex says 28,  but in the recent past I have seen numbers as high as 33,  or even more (37 in one older presentation).  This is a critical issue for acceptable kinematics right off the launch pad.  Mr. Musk himself has said (in his Boca Chica presentation in front of a prototype) that he wants to see liftoff thrust/weight ratio close to 1.5.

I have already reverse-engineered the performances of the sea level and vacuum Raptor engines.  This includes the full intended rated chamber pressure,  as well as throttled-back performance,  which is lower.  These numbers are included here as Figures 3 and 4.  The effects of altitude are included specifically,  at both max and min chamber pressure.  These engines share exactly the same powerhead.  They differ only in the expansion area ratio of their exit bells.  In the predicted performance tables listed in the figures,  shaded cells indicate flow separation due to excessive backpressure.

The booster,  much lighter without the upper stage,  thrusts to kill the downrange velocity,  and for a little bit more speed,  both up-range and upward.  The idea is a net 45 degree upward trajectory,  coasting back toward the launch site on a more-or-less parabolic trajectory.  This will convert by drag to a downward fall toward “entry”,  which is really just hitting denser air and seeing larger wind pressures.  There is an entry burn to reduce speed down to near Mach 1 at fairly low altitude,  with subsequent fall to the landing burn from a presumed Mach 1 terminal velocity in the dense air.

There is a deorbit burn,  followed by hypersonic aerobraking,  with the Starship upper stage.  Once the entry hypersonics are over,  the vehicle assumes the “belly-flop” attitude to limit downward velocity.  At low altitudes,  broadside drag limits the fall velocity to quite modest values,  as already seen in prototype flight tests.  Near the surface,  the vehicle “flips” to vertical attitude by means of engine thrust (and aerosurface action),  and then lands retro-propulsively,  as the prototypes currently do.

Figure 6 indicates how the gravity and drag losses were estimated,  and how they were apportioned among the various burns during the mission.  The booster ascent is initially vertical,  and bends near horizontal upon reaching the staging altitude,   which is essentially exoatmospheric.  I used the simplest means of estimating the gravity and drag loss totals,  and apportioned all the drag loss and most of the gravity loss to the booster stage burn.    This is in accord with the best recommendations of Ref. 1.

Figure 7 indicates exactly how the parabolic ballistic trajectory of the booster flyback was estimated.  The requisite horizontal and vertical velocity components,  which are equal at 45 degrees,  were determined from the required range (merely an educated guess here).  The net burn delta-vee sums this horizontal and the magnitude of the staging velocity,  for the horizontal component.  The vertical component is alone.  The “ideal” or kinematic delta-vee is the vector sum of those components.  To that,  the gravity loss estimate is added (there being no drag loss at altitudes that high).

Figure 8 indicates the details of the booster flyback entry and landing burns,  including the assumptions made.  A potential energy difference to the presumed entry altitude is added to the kinetic energy coming out of the parabolic arc.  That is the kinetic energy at entry altitude in the absence of any drag loss.  Converted back to velocity,  the difference between that and the desired entry speed is the “ideal” or kinematic delta-vee for the entry burn.  This gets the estimated gravity loss added to it for the mass ratio-effective delta-vee.  The terminal speed at the surface,  factored up,  is the landing burn delta-vee.

Figure 9 summarizes which engines get used for each of the burns,  and what the estimated performance of the selected engines are,  at those conditions.  Note that the booster uses sea level Raptors,  sometimes at sea level,  sometimes in vacuum,  and an average of those two during its ascent toward the stage point.  For the entry burn,  I used the 50 kft (15 km) altitude performance values.

The upper stage spacecraft uses its vacuum Raptors during its ascent from stage point to orbit.  It uses a vacuum Raptor for the deorbit burn.  The landing burn is made with sea level Raptors operating at sea level.  Full thrust settings were presumed.

The figure indicates where vehicle thrust/weight ratio ought to be 1.5 (or more) to get acceptable kinematics in vertical flight against gravity.  It also indicates where the Spacex user’s manual (Ref. 2) says that vehicle accelerations should not exceed 6 gees.

One worksheet in the spreadsheet does the entire analysis.  Its image is given in Figure 10.  User inputs are highlighted yellow,  with significant results highlighted blue.  Pertinent comparison data are highlighted green.  This spreadsheet requires user iteration to achieve “closure”.  There are two variables that must be optimized:  the stage point velocity,  and the payload carried by the Starship upper stage.  Spacex advertises “100+ tons to LEO”.  This analysis indicates 171 tons might be feasible.

Instructions are on the worksheet;  these require first determining the stage point velocity such that the required ascent delta-vee equals what the stage can deliver.  That presumes zero propellant remaining after the booster flyback,  entry and landing.  You do this with some “reasonable” payload in the Starship upper stage.

Once that is done,  you maximize the payload carried in the Starship,  such that its ascent delta-vee capability just matches the requirement.  This is done such that deorbit,  entry,  and landing results in zero propellant remaining,  when landing with the full payload.  That last covers the abort requirement if payload cannot be delivered and unloaded on orbit.  This is a highly-constrained analysis,  not general.

You may or may not have to readjust stage point velocity,  then payload,  to fully converge the analysis.

There are inputs for the number of Raptor engines operating in each stage for each of the pertinent burns.  The resulting estimated thrust/weight ratios are computed from these engine number selections and the appropriate thrust performances.  The best guesses for thrust/weight criteria are listed alongside those results.

This analysis indicates that Starship/Superheavy might be capable of delivering as much as 171 metric tons of payload to a low Earth orbit from an eastward launch.  Spacex claims “100+ tons”,  and these results indicate significantly more than that might well be feasible.  The previous analysis (Ref. 3) got a somewhat-lower payload number (still greater than 100 tons) for the same circumstances.

This calculation determines the propellant requirement for Starship to deorbit and land,  and limits payload capability of the Starship to make sure there is propellant on board sufficient to make the landing.  It does this under the assumption that the full payload is carried back down to the landing,  in order to cover an abort possibility where payload cannot be offloaded before a descent is required.

These results are based on certain guesses for stage inert masses.  If there is growth in inert mass beyond that assumed,  it must come straight out of payload capability.  It is also based on maximum propellant loads for each of the stages.  Carrying less propellant reduces payload capability.  Or,  looked at another way,  reducing payload carried reduces the required propellant load.  That analysis is not done in this spreadsheet!  This is not a generalized performance-prediction analysis!

Sending Starship to an elliptical Earth orbit instead of low circular,  has been touted as the way to use Starship/Superheavy for trips to the moon and back,  without any refueling on the moon.  The velocity requirement to reach such an orbit is higher,  reducing the lunar payload capability below the estimate here.  That mission is challenging enough that return payload likely needs to be reduced,  or even zeroed.  This spreadsheet could be used to determine what payload might be delivered to that elliptic orbit.  The lunar mission itself needs to be analyzed separately,  not with this tool. Same for Mars. 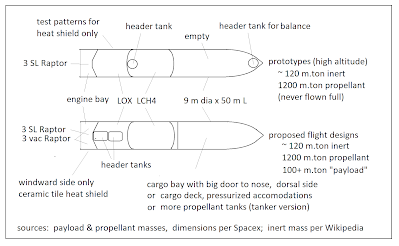 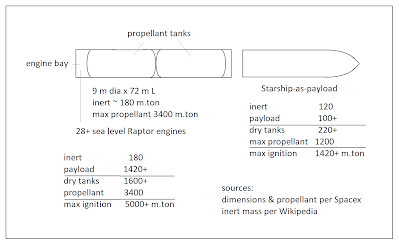 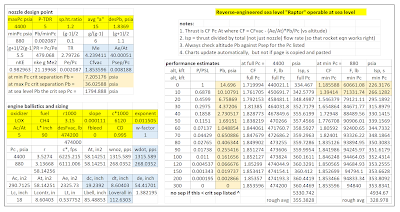 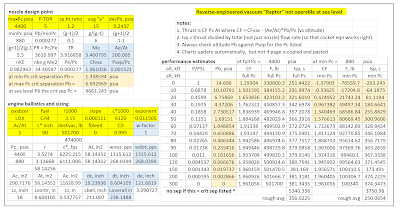 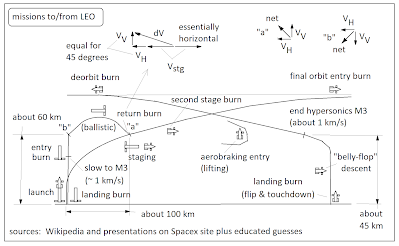 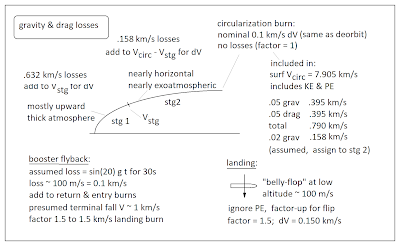 Figure 6 --  How the Gravity and Drag Losses Were Estimated 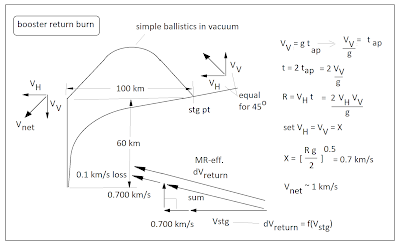 Figure 7 – Details for the Booster Flyback 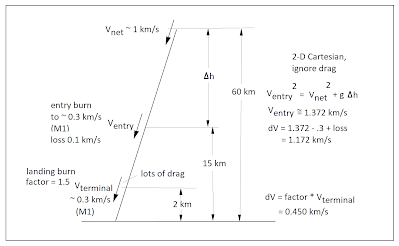 Figure 8 – Details for the Booster Entry and Landing 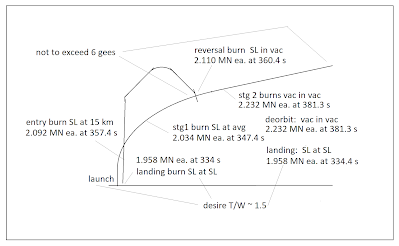 I copied and edited the worksheet to represent a 300 x 1400 km elliptic orbit.  Those changes are shown in Fig. 11.  The results are given in Fig. 12.  Payload reduces to 144 metric tons,  staging is unchanged. 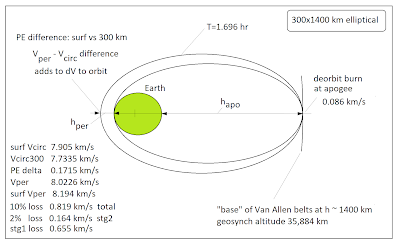 Looking at even higher elliptical orbits,  and assuming radiation dangers to cargo and crews can be addressed,  I found that about a 300x4000 km orbit reduces payload to about 103 metric tons,  with the same staging point.  Orbit data are in Fig. 13,  results are in Fig. 14. 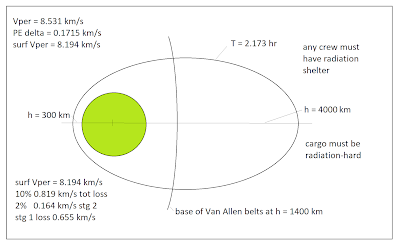 Note that Spacex promises payload delivery of “100+ tons”.  What I found for the high elliptical orbit is pretty close to that figure.  The lower elliptic orbit has a higher max payload figure,  and the low circular orbit a higher max payload still.   This is summarized in Fig. 15.  Note also that radiation protection becomes a serious issue for apogees above 1400 km,  which puts the spacecraft in the Van Allen belts. 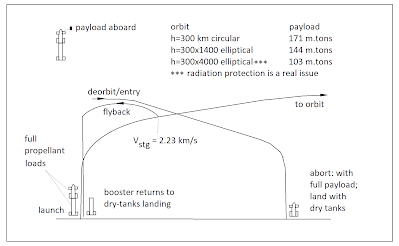 Bear in mind that the “base” of the Van Allen radiation belts is about 1400 km altitude (lower for the South Atlantic Anomaly).  All these orbits penetrate quite far into the radiation belts.  Radiation hardening of cargo,  and radiation shelter protection for any crew,  are simply required.

Bear also in mind that all of these orbits (this update and earlier) were computed under the assumption that an abort back to the surface be feasible,  with full payload still aboard.  That does raise the landing propellant budget,  and it raises the landing thrust requirement.

The overall trend summarizes as the following table:

For those interested,  this spreadsheet I used to estimate Starship/Superheavy performance to these orbits is named “SS SH 2021”,  for my 2021 reverse-engineering estimates of Starship/Superheavy.  These calculations include booster flyback and recovery,  plus Starship deorbit and landing (recovery).  Each destination orbit has its own worksheet.  These are named (so far) as follows: