This article is based on published comments by Elon Musk that (1) there will be a dedicated tanker design for on-orbit refueling operations with Starship,  but (2) initially the “tanker” will just be another Starship.

In the first case (dedicated tanker design),  there will be additional propellant tankage volume in the forward spaces,  where the cargo bays and or passenger accommodations are located,  in the other designs.  The propellant in that extra tankage volume is the “payload mass” ferried to orbit.  It computes directly as any other payload in rocket equation and the 2-body orbital mechanics approximations to performance that I have been using for these estimates.

For that second (initial) case,  the only thing that makes sense is the fly the ordinary Starship-as-tanker to orbit with zero payload but a full propellant load.  It will have unused propellant upon arrival to orbit,  in excess of that needed to land.  That excess can be transferred to the target Starship.

For both tanker cases,  there is no need to support an abort to the surface with payload aboard,  because excess propellant mass can be vented to space prior to any deorbit burn.  Thus,  the tanker landing can be made to the “dry tanks” standard with zero payload,  in either case.  That reduces the propellant reserve for landing that must be withheld from any on-orbit refueling operation.

When I investigated lunar missions with the Starship in Ref. 1,  I looked at a variety of orbits,  from 300 x 300 km altitude circular,  through a variety of elliptic orbits all sharing the 300 km perigee altitude.  I found that the 300 x 7000 km altitude orbit,  and the 300 x 10,000 km altitude orbit,  might prove feasible for Starship lunar missions,  depending upon the payload to and from the moon.  The 300 x 300 km altitude circular is of general interest for all sorts of applications.  Those three orbits are the scope considered in this article.  This article also presumes that all refueling is done in the departure orbit.

When I reverse-engineered orbital performance of the Starship/Superheavy in Ref. 2 (and to support Ref. 1),  I obtained payload capabilities and staging velocities for Starship/Superheavy,  under the assumption that the Starship landing reserve of propellant be sufficient to support an abort to surface with the full payload still aboard (a dry-tanks landing at full payload).

That is not necessary for any Starship design used as a tanker.  Tankers can always vent propellant overboard prior to the deorbit burn,  down to only that required for a dry-tanks landing at zero payload. Which situation is exactly why the propellant-as-payload and landing reserve numbers for the tankers are different from those for the target ship,  to the same orbit.  Data are given in Table 1.

In the data table,  “target” means the Starship vehicle to be refueled on-orbit.  “Dedicated” means a dedicated tanker Starship design with extra tankage volume in the forward section.   “Ordinary” means another cargo or passenger Starship operated with zero payload in the forward section,  whose deliverable “payload” is merely the excess propellant not used reaching orbit,  less the landing reserve.  “Full refill” means filling to the capacity,  currently thought to be 1200 metric tons.  The number of “tankers to refill” is for a full refill,  and is the max refill requirement divided by the deliverable propellant from a tanker vehicle.  For planning purposes,  you should round up any decimals.

Lunar landing missions are too demanding in terms of total delta-vee to be flown from the low circular orbit,  without any refueling on (or near) the moon.  The same is true of Mars missions,  although there are materials on Mars from which propellant can be made,  unlike the moon.

Departing from a sufficiently-elongated elliptic orbit with a high-enough perigee velocity lowers the departure delta-vee sufficiently to make an unrefueled lunar landing mission feasible with a filled-to-capacity Starship,  at some reduced payload.  The higher-energy elliptic orbit also reduces the payload that can be carried up to orbit from Earth.  It makes sense that payload ferried up is also payload carried to the moon.  The elliptical orbit where these payloads are equal is preferred for the mission.

See the data in Table 2,  bearing in mind that these results for the target vehicle were partially just read from a graph in Ref. 1,  not specifically supported by precise calculations.  Imprecision is inherent.

Also,  the presumption here is that the tankers fly directly to the same elliptic departure orbit as the target vehicle.  No other scenario was considered at this time.  That does not mean that there are no other scenarios!  One possibility for future investigation is refueling in low circular orbit,  then moving the target vehicle to the departure orbit,  along with 1 or 2 more tankers to fully refill it just before departure.

“How I Did It” for the 2 Different Tanker Choices

These tanker versions of Starship and the “regular” cargo or passenger Starship all share exactly the same “model” of the Superheavy booster.  That booster’s flyback for recovery is modeled first,  and in reverse.  The touchdown is figured as a dry-tanks landing,  with engine cutoff just as the on-board propellant zeroes.  Then the entry burn is modeled,  and finally the boost-back burn.  That quantifies the propellant still on board at staging.

For the dedicated tanker design,  I use exactly the same analysis as for the cargo/passenger Starship.  You burn the available propellant,  and see what delta-vee that gets you.  You set the payload to that value which gets you the right delta-vee.  Your “payload” is the transferable propellant.

I want to look more closely at doing a full refill of the target vehicle in the low circular orbit,  then moving it and 1 (or 2) more tankers to the elliptic departure orbit.  That would be an attempt to reduce the number of tankers required to effect a full refill at departure for a lunar landing mission.  Scope would be for the 300 x 7000 km orbit with 75 tons to moon,  and 0 return payload,  plus the 300 x 10,000 km orbit with 59 tons to the moon and 32 tons returned.  That might have a large payoff,  given the large disparities in the number of tanker flights needed for the low circular orbit,  versus either of the lunar-departure elliptical orbit choices.

These numbers were created with essentially pencil-and-paper hand calculations for the rocket equation and the combination of 2-body solutions for the orbital mechanics.  The only way to make such calculations realistic is the judicious use of appropriate factors to increase the theoretical delta-vee requirements,  and a judicious approximation to combine 2-body orbital mechanics models in lieu of a real 3-D trajectory program in a computer.  That art is summarized in Refs. 3 and 4.

These numbers were also created with the best available data regarding the propellant capacities and inert masses for the Starship and Superheavy stages,  and for the performance characteristics of the sea level and vacuum versions of the Raptor engine.  More of that was available on the Spacex website in prior years than is there now.  Much of this now has to be obtained from online sources like Wikipedia.

I did my engine performance figures from information that used to be posted on the Spacex website,  and is no longer posted there.  They do still post propellant capacities for the stages,  but not the inert masses (and they never did).  Inert masses came from Wikipedia.

The results are very sensitive to such data,  particularly the stage inert masses.  Increases in inert mass must come directly out of payload capability.  What I have is “in the ballpark”,  but still subject to change,  especially as Spacex has begun flight testing of the Starship vehicle,  and soon the Superheavy booster.

These results indicate some phenomenally-attractive capabilities with this basic vehicle design.  Those are enough to warrant solving both the known,  and the still-unknown,  problems with this design,  which problems will become more-and-more evident as flight testing proceeds.  Those include (but are not limited to) ullage/slosh problems inside un-bladdered cryogenic propellant tanks,  propellant leaks leading to engine bay fires,  and a totally-inadequate design concept for the landing legs (both stages,  but more especially the second stage).

References (all are articles published on this site) 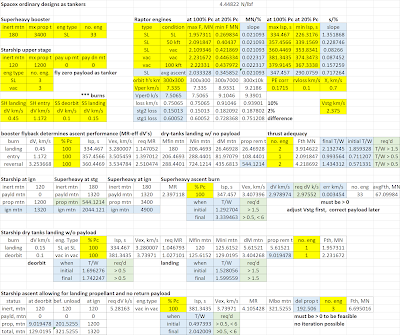 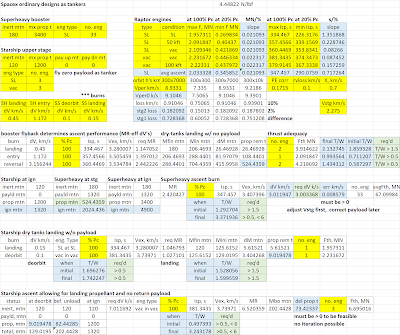 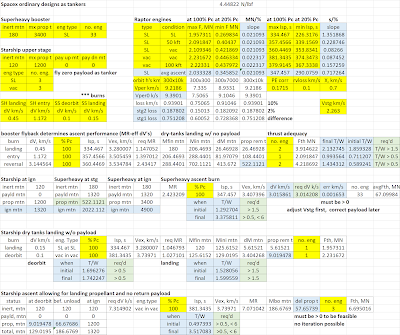 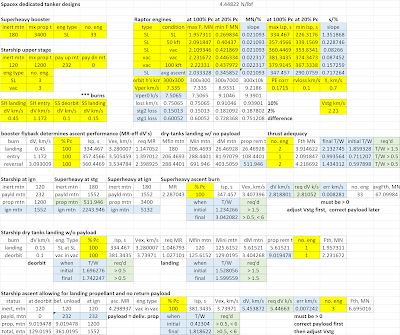 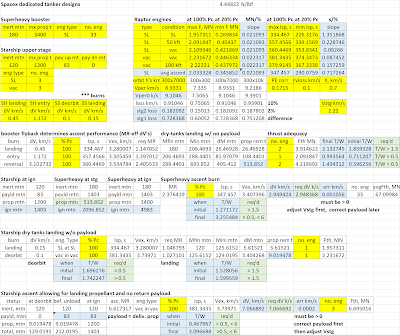 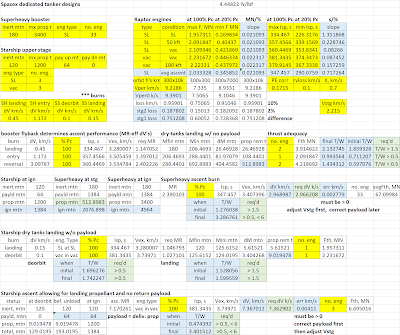